Bangkok, Thailand, August 18, 2021 – Uzbekistan has stepped in to replace Sri Lanka following their withdrawal from the 21st Asian Senior Men’s Volleyball Championship in Chiba, Japan from September 12 to 19, 2021.

Eligible to strut their stuff in the topflight competition, Uzbekistan, current joint world No.136, will now join Australia, China and Kuwait in Pool C to vie for the two slots up for grabs in the group for the top 8 round.

Sri Lanka Volleyball Federation disclosed that all 20 players and 3 staff coaches have been admitted to the hospital after testing positive for COVID-19. As a result, the SLVF informed AVC of their decision to withdraw their team from the Championship.

World No.55 Sri Lanka qualified for the Championship following their convincing 3-0 home victory over Uzbekistan in the Central Asian Zonal Pre-Qualification Match at Sugathadasa Indoor Stadium in Colombo in July 14. As Sri Lanka cannot join the fray, Uzbekistan, approved by AVC, has the right to replace Sri Lanka as one of the 16 men’s teams to compete in the next month’s Championship.

Uzbekistan will now have a chance to prove their worth against the continent’s top teams in the Championship. Out of 20 editions contested, Uzbekistan took part in 4 Championships and similarly finished on the bottom 16th including their latest appearance in 2013 in the UAE.

The 21st Asian Senior Men’s Volleyball Championship is set to take place in Chiba, Japan between September 12 and 19, 2021. World No.11 and hosts Japan are in Pool A with India, Qatar and Bahrain, while reigning champions Iran, Pakistan, Thailand and Hong Kong China are in Pool B. Pool C consists of Australia, silver medallists at the previous edition, China, Uzbekistan and Kuwait, with Korea, Chinese Taipei, Kazakhstan and Saudi Arabia in Pool D.

All participating teams will compete in the group round-robin preliminaries between September 12 and 14, with only top two teams from each group making the cut for round of the top 8 teams and the next two from each group competing in classification round for 9th-16th places.

Following the Sri Lanka’s sudden withdrawal decision and the team replacement of Uzbekistan, AVC on Tuesday sent the revised match schedule as shown below to all parties concerned including participating federations. 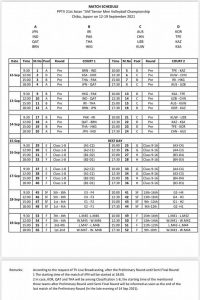