The Men’s Volleyroos squad announced today by Volleyball Australia is an eclectic mix of youth and experience, with the team ready to take on the 2022 Men’s Volleyball Nations League (VNL) campaign under the guidance of new head coach Dave Preston.

Officially appointed just a few weeks ago, Preston is looking forward to his first international tournament at the helm of the Volleyroos and is excited by the prospect of bringing the Australian men’s national team to the position they aspire to.

“I’ve been welcomed with open arms and I am honoured and humbled to be a part of this program,” Preston said. “Volleyball Australia is a world-class organisation and the culture, the atmosphere and the camaraderie have been amazing.”

With the first match of the VNL preliminary round just a week away, the recent training camp at the Australian Institute of Sport (AIS) in Canberra gave Preston the first opportunity to meet the team and provided athletes with plenty of chances to do some learning while competing for a spot on the roster.

The Volleyroos will begin their 2022 VNL campaign against Brazil on June 9, the first of 12 matches played over the following month which also include top-level clashes against reigning Olympic Champions France and 2021 Asian Men’s Champions Iran.

“We knew it was going to be a pretty short runway towards the first match against Brazil,” Preston said, acknowledging that facing the defending VNL champions on their home soil won’t make for an easy debut.

“But when you’re playing the best teams in the world, the margins are always pretty tight. World-class teams will be world-class and playing Brazil in Brasilia will be a really good standard for us to set, as we try to be in that mix,” Preston said. 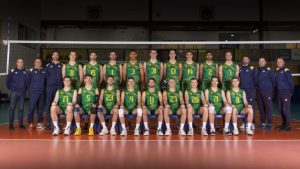 The new head coach has already been impressed by the resilience and grit demonstrated by the Volleyroos in training, with captain Luke Perry primed to provide leadership on the court.

“It’s always been an honour to captain this team and I am really excited to work with the group” Perry said.

“With a lot of new faces in the team, and an experienced new coach, the boys have put in a lot of work over the past couple weeks, introducing new team systems and getting used to relationships on court.

“So now the preparation is pretty much done, it’s tournament mode for all and time to compete.

“Our team is actually quite inexperienced for ‘European league experience’ compared to the past, but I know our guys are ready to jump in to some teams over there and really establish themselves.

“I’m most looking forward to playing Brazil in Brazil, and going out there every game and playing high level volleyball to compete with some of the best teams in the world,” he said.

“It’s an exciting time for the Men’s Volleyroos as they embark on their VNL journey for 2022,” Dee said.

“We have a lot of new faces mixed in with our more experienced squad who have all been working very hard at the preparation camp under the watchful eye of new head coach Dave Preston.

“We can’t wait to see what this group can achieve together, and myself and everyone at VA will be cheering them on from Australia every step of the way.”

With the program currently going through a significant rebuilding process, this year’s VNL will also be the first stepping stone of a development project that aims to make the Volleyroos competitive for medals at the Brisbane 2032 Olympics.

Preston admits that his focus is already split between these two separate missions – for the team to perform as well as they can in the short term, but also to lay the foundations for the long-term growth of the team in the run-in to the home Games.

“All the decisions we make, all the structure that we try to put around the team and all the foundations that we’re building right now are leading towards that.

“If we want to remain as competitive as we can on an international level, we want the top talent in our program to get stronger and stronger, but we really need to focus on the up and comers too.

“That puts a lot of eyes on the 18 to 21-year-old young men right now, and maybe even younger,” he said.