With six of their ‘top guns’ newly arrived and joining the squad, reigning Olympic champions China have begun their assault in the race for a ticket to the semifinals of the 2021 FIVB Women’s Volleyball Nations League in Rimini, Italy with a sweep of the Netherlands on Saturday. 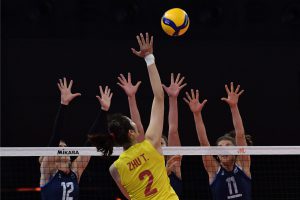 Celeste Plak of the Netherlands said at the virtual Mixed Zone: “Before there was a different team of China playing until now. The new team came in, or the ‘old’ team depending how you look at it. So we didn’t know what to expect, but China did some good work. They played really well. “At the beginning we had a lot of trouble, hard at times to keep up the pace with them and get off them but at the end of the last set it was a great battle. It was really nice volleyball to watch and I am proud of my team. We lost 0-3 but I’m really proud,” she added. China’s Zhang Changning said: “Today we played a very good game with some of our players coming and joined us. Today we had great cooperation and I think that in the next days we will be even better than today.”

USA STRUGGLE TO BEAT JAPAN IN HARD-FOUGHT THREE-SETTERHARUYO SHIMAMURA: “BOTH TEAMS WERE VERY MOTIVATED TO WIN”