Lausanne, Switzerland, October 16, 2019 – Beach volleyball fans have a great year to look forward to with as many as 42 events featured on the 2019-2020 FIVB Beach Volleyball World Tour Calendar and the beach volleyball tournament at the Tokyo 2020 Olympic Games another highlight of the season.

The 2019-2020 calendar includes Beach Volleyball Major Series events in Gstaad, Vienna and Hamburg, as well as a 5-star tournament in Rome that will define the final Olympic Ranking towards the Tokyo 2020 Olympic Games and a total of eleven 4-star stops, including new venues in Singapore and Cancun. The calendar also includes new events in Laos, Cambodia, Israel, Korea, the Cook Islands, Guam, Iran and China, as the World Tour prepares to visit all five continents for a total prize purse of $6.56 million. 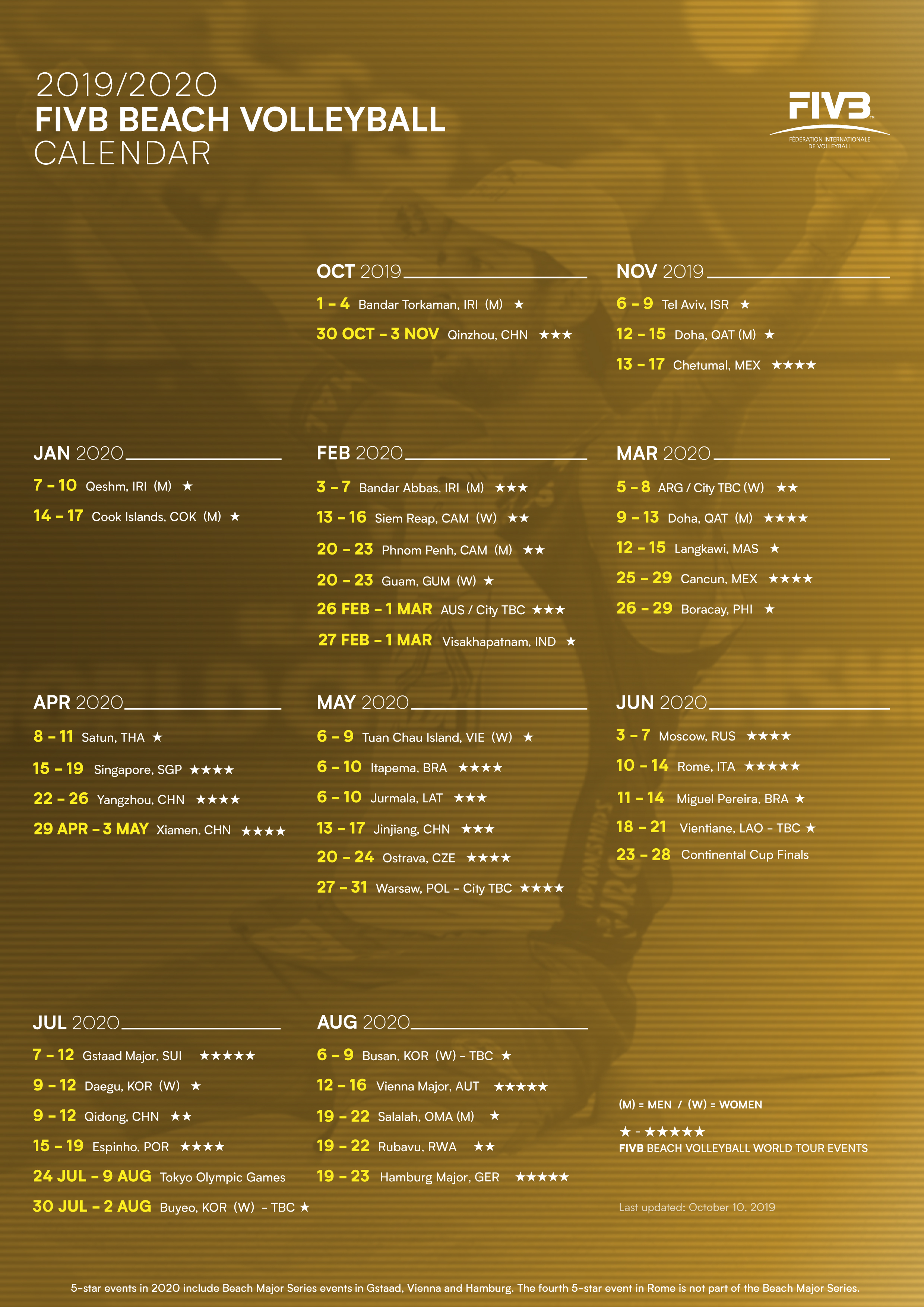 The season begins with five tournaments in October and November this year, including previously confirmed stops in Iran (Bandar Torkaman), China (Qinzhou), Qatar (Doha) and Mexico (Chetumal). They are joined by a new 1-star double gender event in Tel-Aviv from November 6 to 9 as the World Tour makes its first visit to Israel.

Asia will host the first event in 2020, a new tournament in Qeshm, Iran in January, followed by stops in the Cook Islands, Bandar Abbas (Iran), Siem Reap and Phnom Penh (both Cambodia), Guam, Australia (Venue TBD) and Visakhapatnam (India), with the Cook Islands and Guam hosting the first World Tour events in Oceania outside Australia.

Argentina is set to welcome a stop at the beginning of March, before the World Tour returns to Asia for the first 4-star event of the year in Doha from March 9 to 13 and stops in Langkawi (Malaysia) and Boracay (Philippines) and a 4-star in Cancun (Mexico). 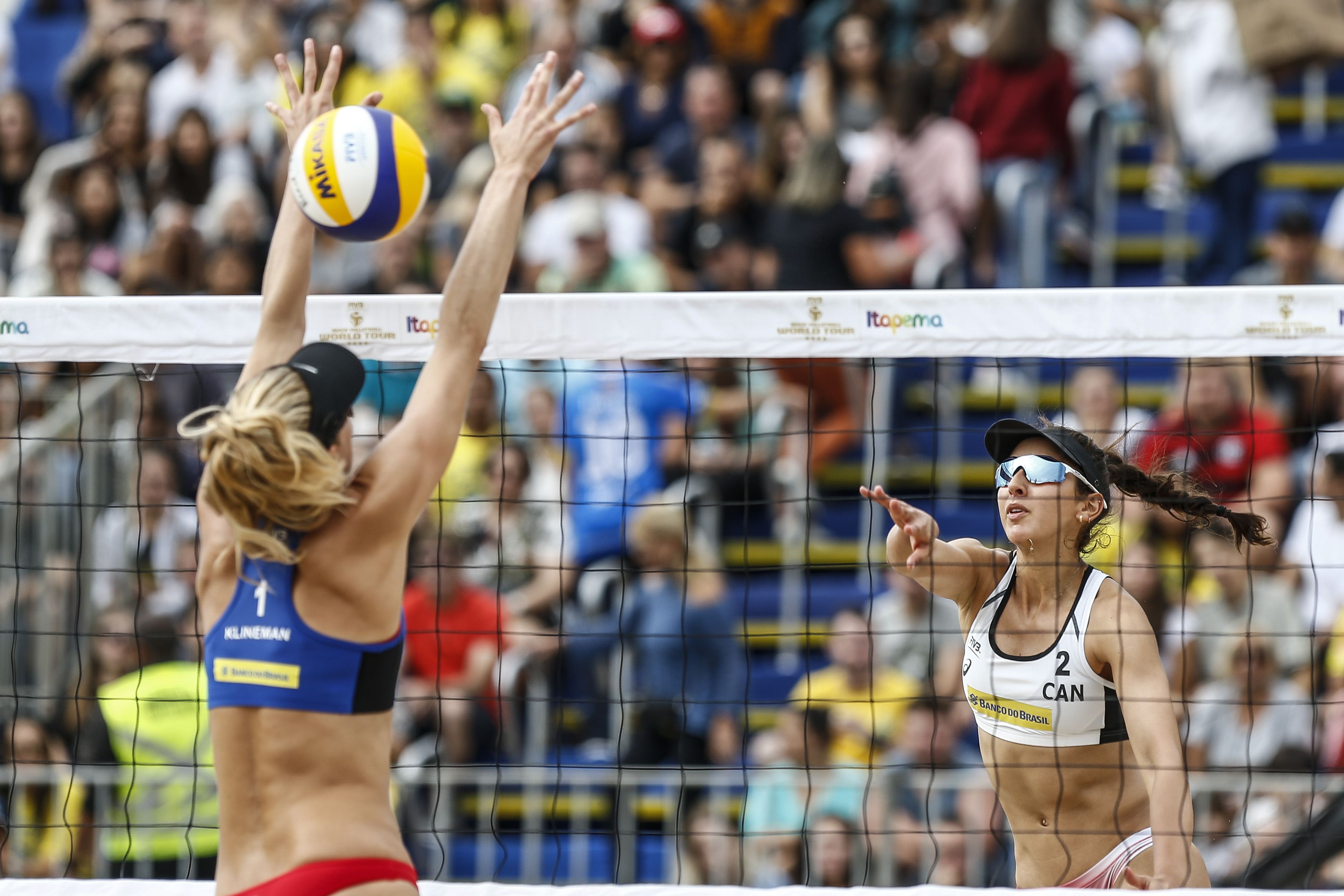 The first of the four 5-star stops on the 2019-2020 World Tour is scheduled to take place on the weekend ending on June 14, the date which serves to define which teams will qualify for the Tokyo Games via the Olympic Ranking. The Rome tournament will be held after the Italian capital also successfully hosted the 2018-2019 World Tour Finals last September.

The 5-star Gstaad Major is scheduled a month later from July 7 to 12 after stops in Miguel Pereira (Brazil) and Vientiane (Laos) and alongside events in Daegu (Korea) and Qidong (China). The World Tour will also return to Espinho in Portugal ahead of the Tokyo 2020 Olympic Games in July.

The beach volleyball tournament at the Tokyo 2020 Olympic Games will then take centre-stage over the final week of July and first week of August (July 25-August 8), alongside World Tour events in Buyeo and Busan (both Korea), before the final two 5-star Beach Volleyball Major Series events of the season in Vienna, Austria (August 12-16) and Hamburg, Germany (August 19-23) provide the final climax of the season. 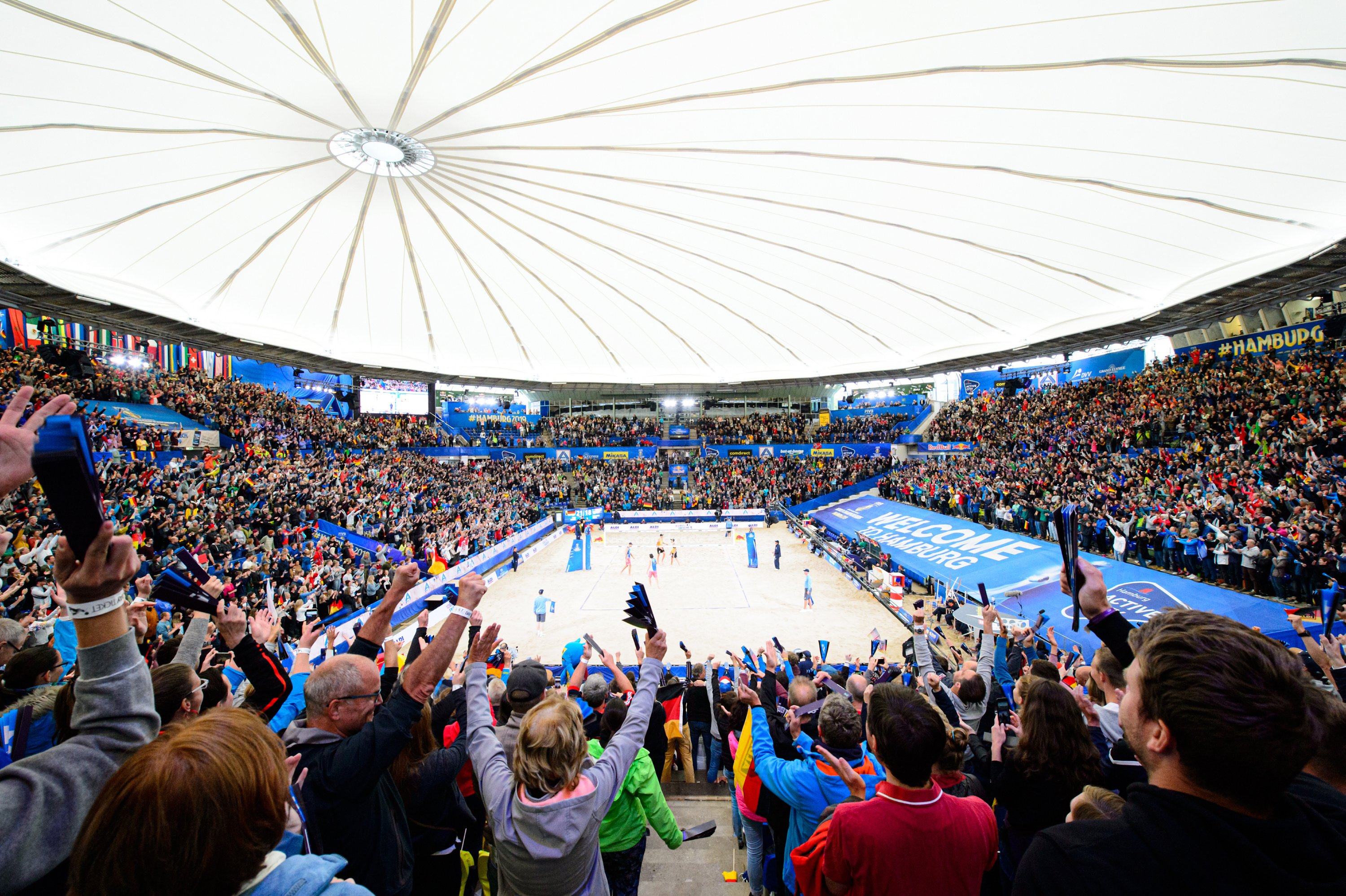 The month of August will be completed by events in Salalah (Oman) and Rubavu (Rwanda), which will host a 2-star event for the first time after organising a 1-star competition in 2018/2019.

Two weekends have been reserved for FIVB Beach Volleyball Continental Cup tournaments from May 12-17 for the 2nd phase of the competition and from June 23 to 28 for the Finals, which will complete the qualification process for all confederations for the Tokyo 2020 Olympic Games.

The FIVB Beach Volleyball U19 World Championships will follow the end of the 2019-2020 World Tour season from September 1-6 and will be held in Thailand.

The FIVB expects to announce additional World Tour events across a range of countries. All updates to the 2019-2020 World Tour Calendar will be made available on fivb.com and across the FIVB’s social media platforms.

Currently ranked from one to five stars, where five- and four-star are the highest level elite events and three-, two- and one-star events help to develop the sport in as many regions as possible, the FIVB is also working on a new structure for World Tour events ahead of 2021 as the sport builds towards the next edition of the FIVB Beach Volleyball World Championships in Rome.