Wuhan, China, October 16, 2019 – With two days remaining ahead of the grand opening of the 7th CISM Military World Games 2019 in Wuhan, the Games women’s volleyball competition kicked off here on Wednesday morning at Jianghan University Gymnasium.

Title-holders Brazil, DPR Korea and hosts China all claimed straight-set wins, but France struggled to edge past Netherlands in a five-set thriller. 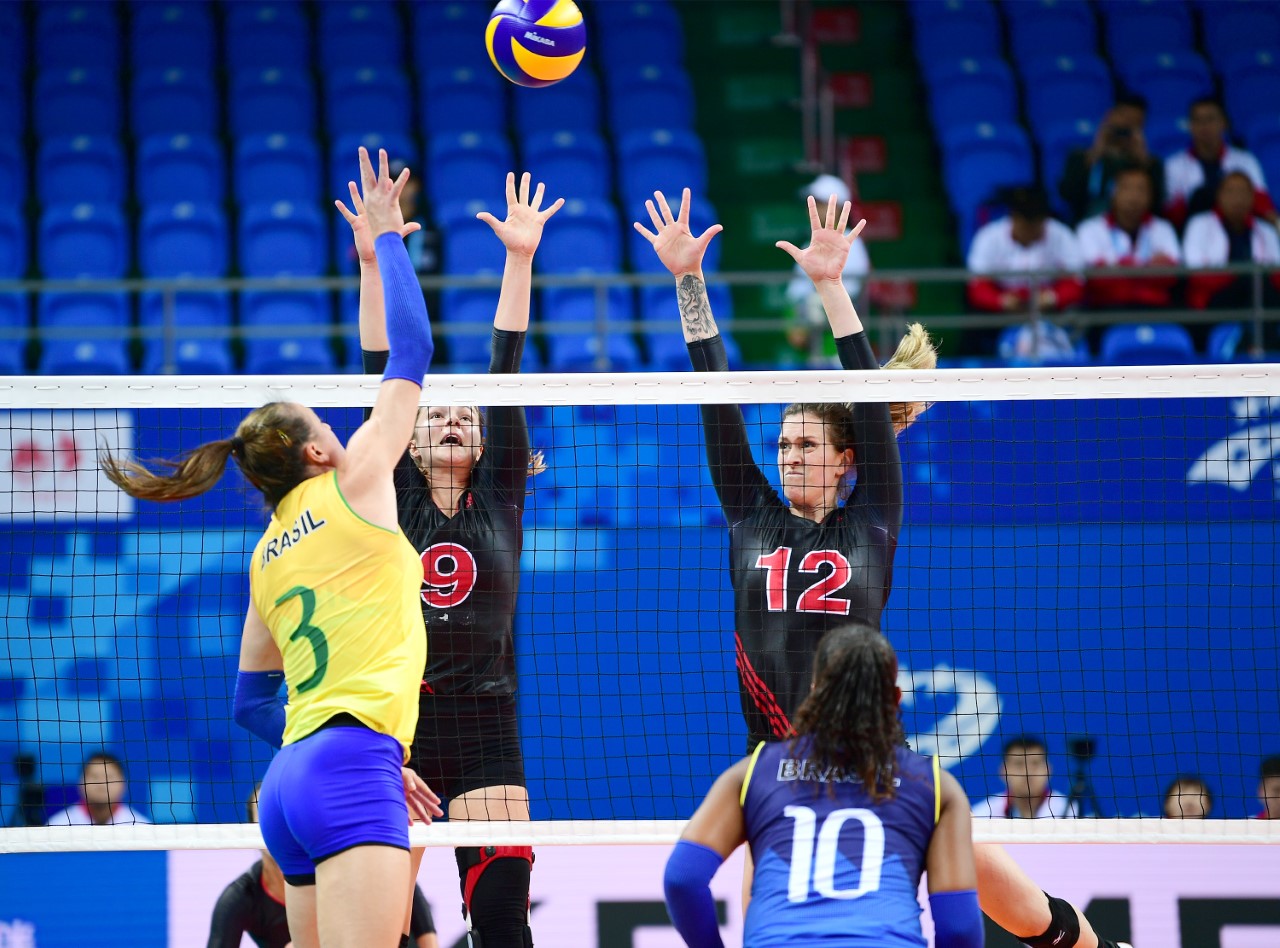 At the first set, Brazil immediately found their rhythm and executed like a well-oiled machine on the way to victory. With excellent serving, blocking and passing, Brazilians closed out the set 25-12. Brazil took control in the second set while Canada had the reception problem. The third set provided more of the same situation, as Brazil took the initiative and were never threatened to conclude the set 25-12 and match 3-0. 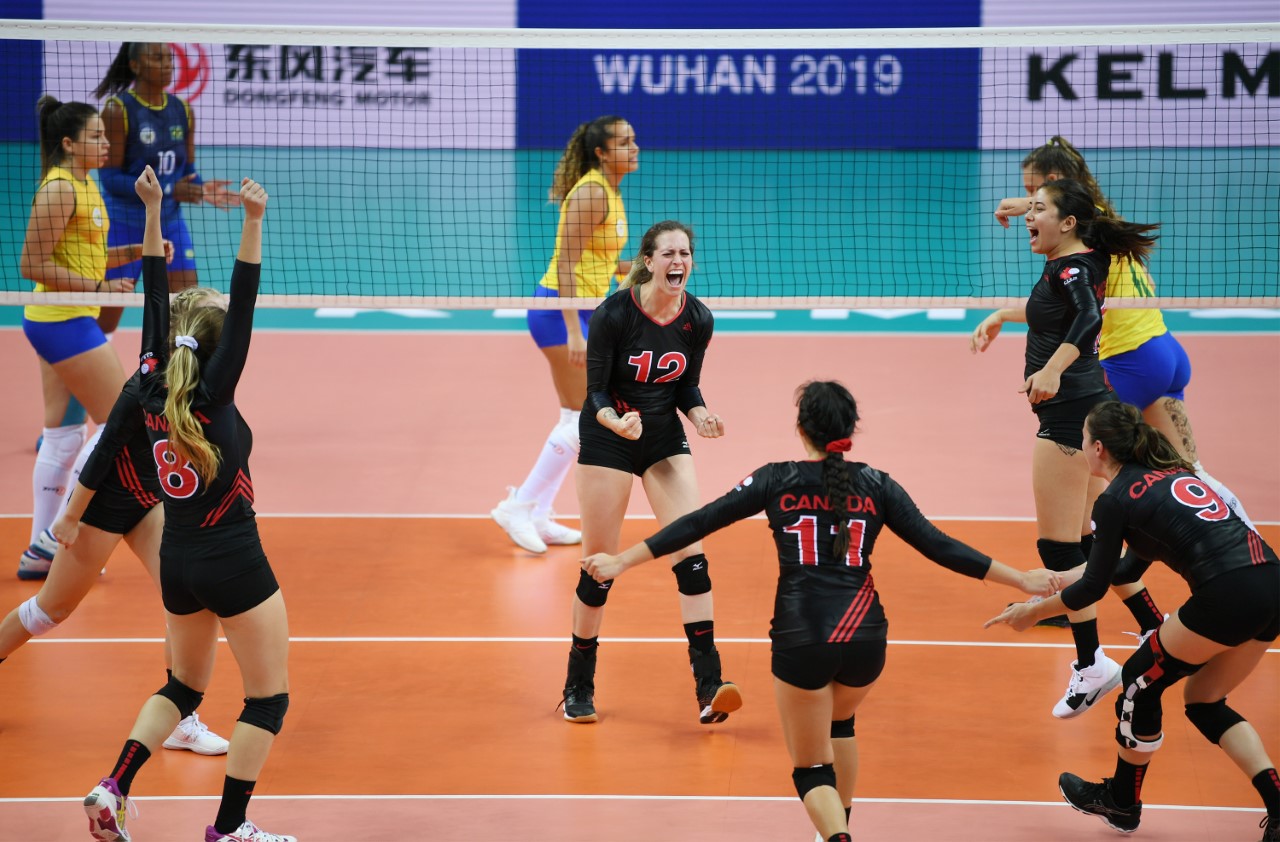 Santos Carla chipped in with a match-high 11 points from 30 attempts for Brazil, while Canada were weak in attacking as the whole team scored only 11 attack points.

At the very beginning of the first set, the Netherlands took the initiative, coming out strong on attacking. France came out aggressively to oppose pressure on their opponents with powerful serves and attacks and took the set 25-19. In the second set, both teams traded leads until the Netherlands tightened their attacking to wrap up the set 25-16 with a devastating spike. The third set followed the same pattern seeing the Netherlands end the set 25-17. France quickly grabbed an 8-4 lead at the first technical timeout in the fourth set and kept their advantage to 18-12. An unforced error from the Netherlands gave France the set 25-21. In the tie-breaker, France passed and blocked well to seize the upper hand on some incredible rallies and closed the set 15-11. 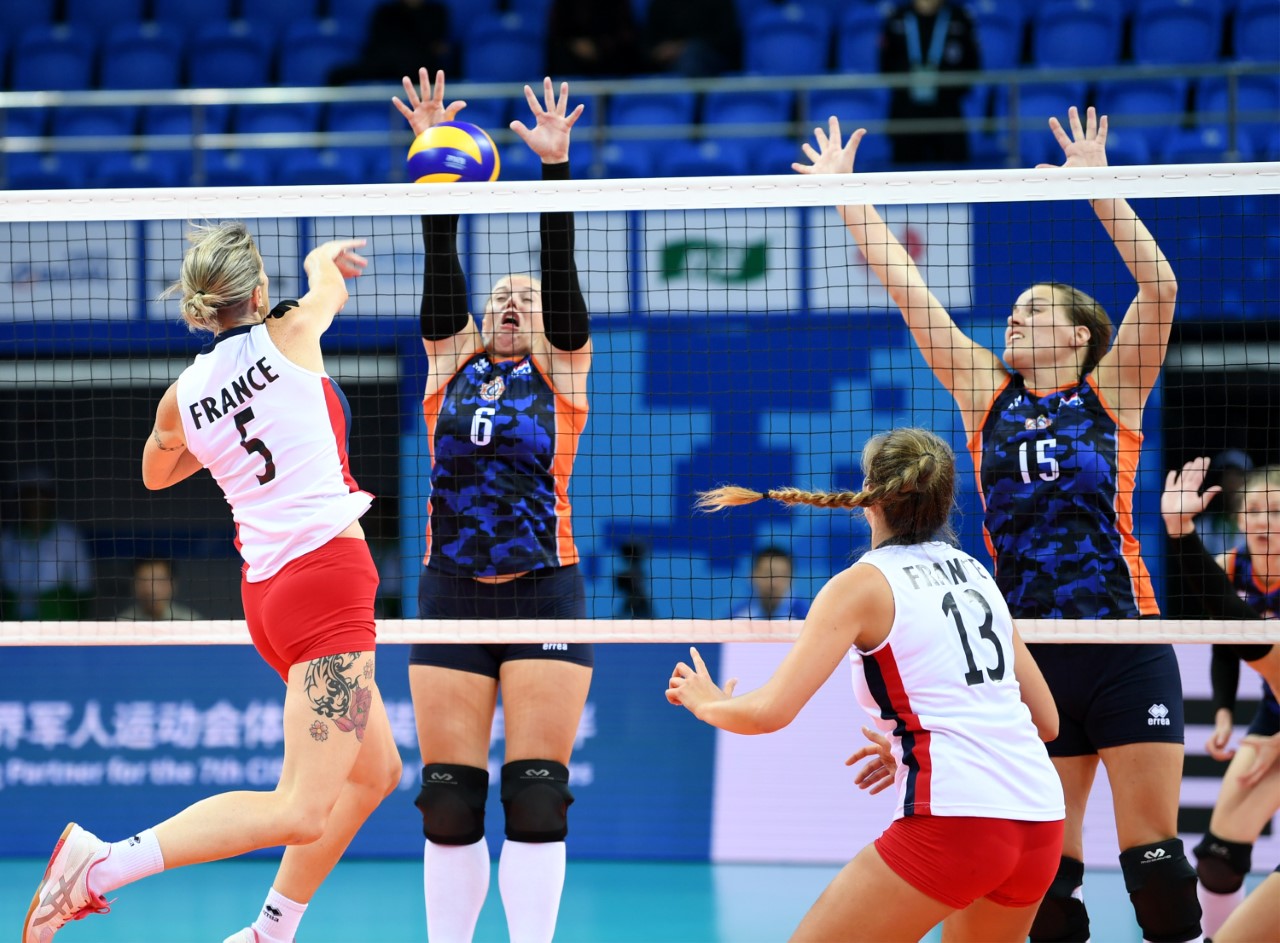 Koning Annelies bagged a match-high 25 points but could not bring victory to the Netherlands, while France allocated their fire evenly with four players scoring double-digit points.

In the first set, the Koreans took control of the match early while Germany were unable to contend with the attacks and blocks of their opponents. The second set looked very much like the first, seeing the DPR Koreans move out to an 8-4 advantage at the first technical timeout. Highly-skilled captain Jong Jin Sim and RI Ra Hyang wrecked the blocking of Germany with some mighty spikes to make it 16-7 before sealing the set 25-9 on a miscue committed by Germany. The Koreans raced to a 24-13 lead following a terrific ace by Son Hyang Mi in the third set. Kim Hyon Ju’s heavy hit helped DPR Korea win this set 25-13 and match 3-0.

The last match of the day saw captain Liu Yanhan steer China to a comfortable straight-set 25-10, 25-9, 25-16 win in front of the crowded Chinese fans.

In the first set, Liu Yanhan helped her team settle into the match and pull off a crunching spike to 16-8 at the second technical timeout. A monster block by Gao Yi made it 24-9 for China before Liu Yanhan concluded the first set 25-10 with another piercing spike. In the second set, Wang Yunlu stood out with excellent spikes and service to help China quickly grab an 8-3 lead. Besides, Yuan Xinyue jumped high for a spike to score rapidly on attack. Another spike by Wang Yunlu widened the gap to 21-8 before China quickly finished the set 25-9. In the third set, the fight was intense with neither side being able to get more than three points ahead. USA seemed to find their rhythm as they took a slim 8-6 lead at the first technical timeout. However, China soon came back with Li YingYing’s ace and Yuan Xinyue’s spike to a 12-12 tie. The hosts never gave the opponents any more chances before shutting them out with the 25-16 win.

The women’s volleyball competition of the 7th CISM Military World Games 2019 will take place in Jianghan University Gymnasium from October 16 to 17 and then move to Wuhan Sports Center Gymnasium for the remaining matches on October 20 to 22 after the grand opening ceremony of the Games at Wuhan Sports Center. The final showdown will be held on October 22 to decide the gold medal in the women’s event.

Wuhan, the capital of Hunan Province and the largest city of China central area, was granted the right in May 2015 to host the 7th CISM Military World Games 2019. This is for the first time that China host the CISM World Games. The Games will be open on October 18 and closed on October 27.