Doha, Qatar, October 16, 2019 – The national team of United States triumphed with the men’s gold at the first FIVB-sanctioned beach volleyball 4×4 event at the 2019 ANOC World Beach Games to match the achievement of their American counterparts in the women’s tournament. Brian Cook, Casey Patterson, Maddison McKibbin, Riley McKibbin, Taylor Crabb and Troy Field emerged victorious from Wednesday’s final at the Katara Beach in Doha, leaving home favourites Qatar in second place with the silver. The bronze medals went to Indonesia.

Within the fantastic ambience created by the fans who packed the stands of the beach volleyball stadium, the home team of Qatar and the US squad engaged in a power battle. The Americans showed more variation in both offence and blocking to gain control, which led them to a 21-18 win, with Taylor Crabb blasting the hit for the closing point. With Sheikh Tamim bin Hamad Al Thani, Emir of Qatar, and members of the royal family also among the spectators, the home side continued to fight hard in the second set. They did not surrender even when facing a double match point for USA and came back to extend it into overtime, even earning a match point of their own. The spectacular showdown continued through a 26-24 close and a well-deserved victory for the Americans. Qatar’s Cherif Younousse was the best scorer of the match with 23 points to his name. Brian Cook led the scorers on the winning side with 16.

“Oh, it was so much fun!” exclaimed Brian Cook after the awarding ceremony. “Coming into the tournament, we didn’t even know how to play the style of four-men you need to play on short court. We are used to playing on a big court. Once we switched to more of an indoor line-up, we figured out how to play and we had the perfect personnel for it, all six guys. The Qatari people are amazing. The tournament was unbelievable, especially for being put together in three months. So it was all around a lot of fun. It feels pretty cool to be able to say we are the best four-men team in the world.”

“This is a new format for us and the US team was really prepared,” Cherif Younousse commented. “I was the only beach volleyball player on our team, since Ahmed is injured. But our team did our best, we gave all that we have and it was an amazing experience for us, especially with the home crowd. The stadium was really full and this was the first time like this in Qatar. We missed the last piece of the cake, but it happens. We have a lot do in the future.” 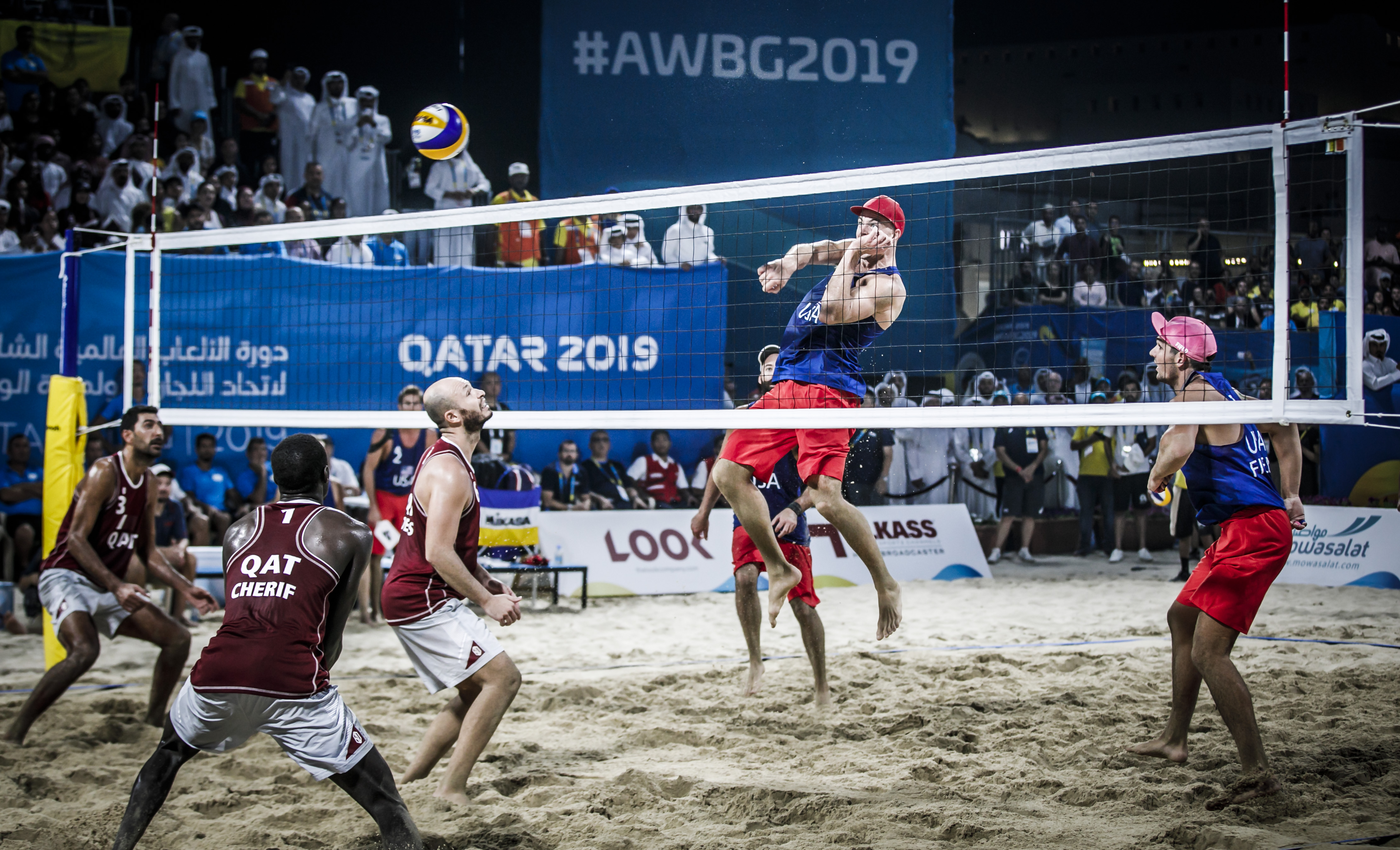 Indonesia made it look easy in the first set of the bronze medal match. The Asian squad defied the opponents’ obvious height advantage and with great technique and elegant touch cruised to a comfortable 21-13 win. The second set was a different story. Poland managed to recover from an early deficit and not only caught up on the scoreboard, but took control to reach triple set point. They got denied twice, but on the third attempt Mikolaj Miszczuk hammered it off the block to fix the 21-19 close and prompt a tie-breaker. Poland took the first two points in the deciding set, but Indonesia responded with three kill blocks to regain the lead. The fierce battle continued as the Asian squad gained more ground towards the victory. It came at 15-11 on a successful block by Yosi Firnanda. Rendy Licardo piled up as many as 19 points towards the win to top the charts of the match.

“We are extremely happy! This achievement is way beyond what we came here for. We were hoping to make the final four, but we never expected to be on the podium,” said Rendy Licardo after the match. “Our team consists of young talents and this was our very first time in international competition. This success will motivate us to train harder and fight harder in the future.” 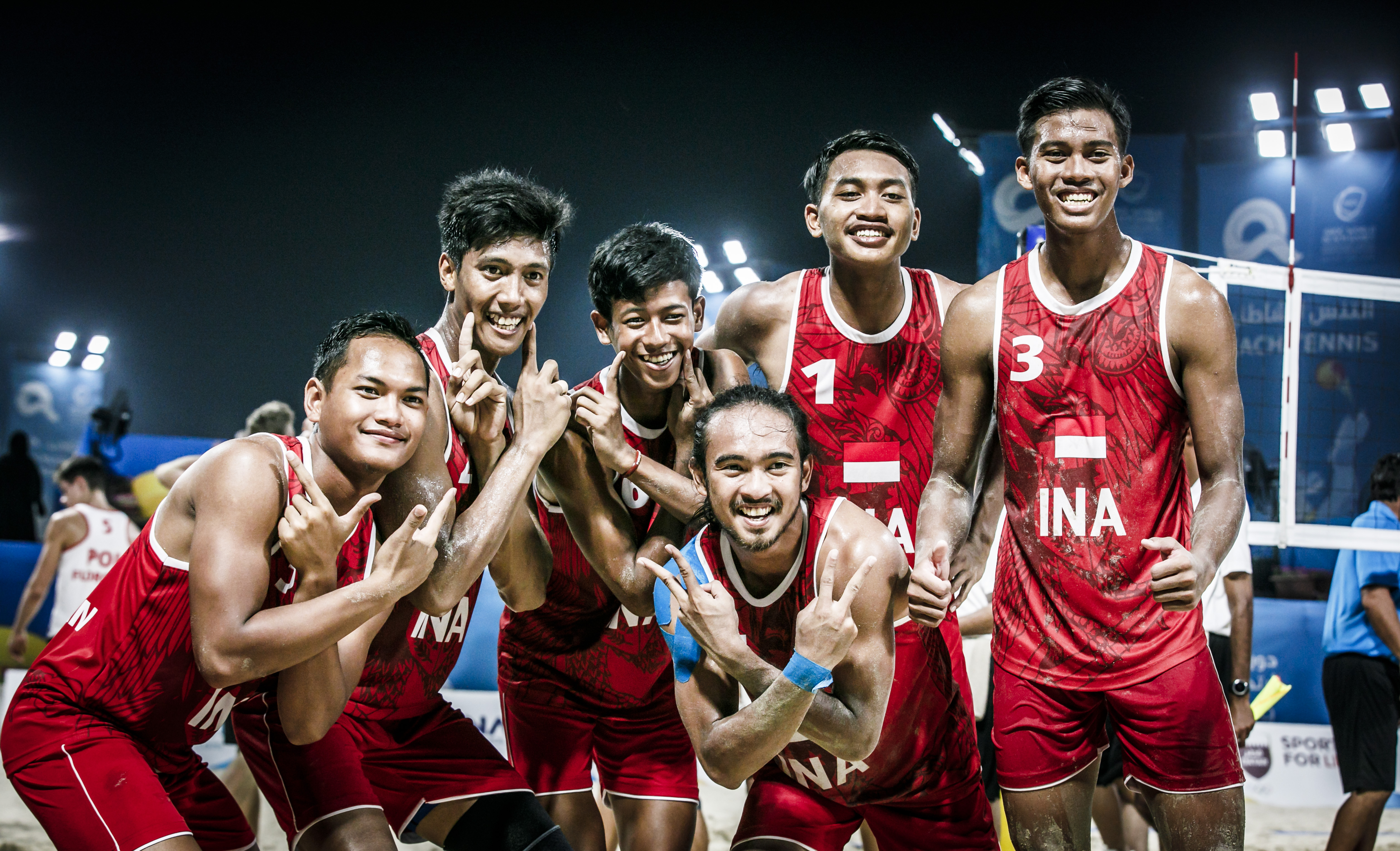