The AVC will hold six Asian Championships this year, but draws for five Championships had been conducted on Tuesday, leaving hosts Myanmar to conduct by themselves on the same day the drawing of lots for the 3rd Asian Men’s U23 Volleyball Championship to be held in Nay Pyi Taw between August 3 and 11. 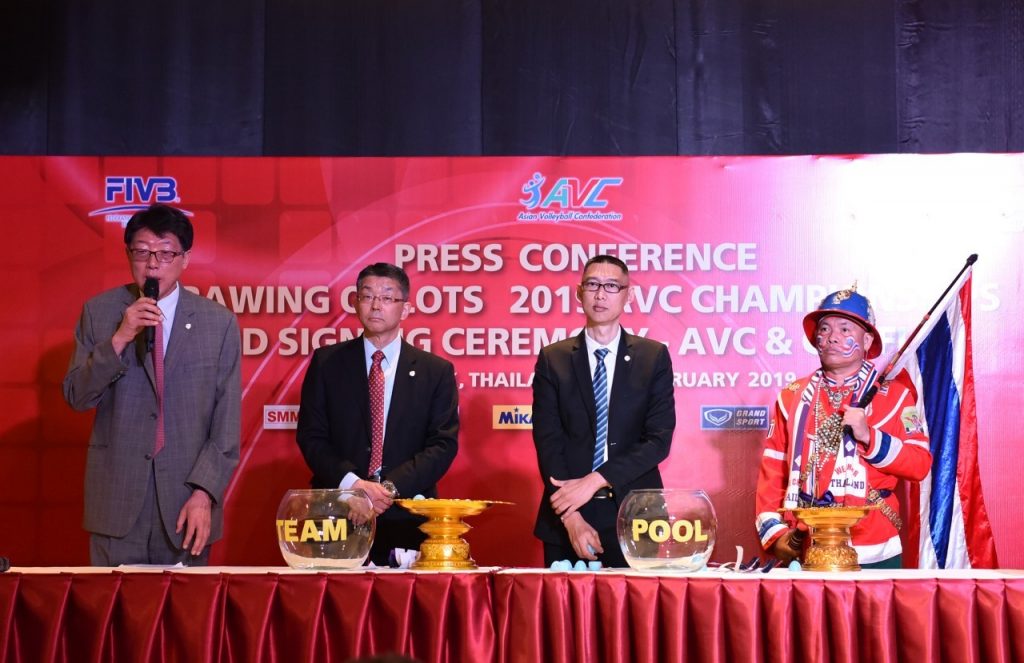 The AVC will kick off its first competition campaign of the year with the 2019 Asian Men’s Club Volleyball Championship in Taipei, Chinese Taipei from April 18 to 26. According to the draw results, hosts Chinese Taipei, which finished a below-par 8th at the previous edition in Myanmar last year, are in Pool A with Australia, Kuwait and Singapore. Defending champions Iran, Sri Lanka, Turkmenistan and Indonesia are in Pool B, while Pool C comprises Kazakhstan, silver medallists in Myanmar, Thailand, sixth place in the previous episode, Qatar and India. Vietnam, Japan, Iraq and Hong Kong China are in Pool D.

The 2019 Asian Women’s Club Volleyball Championship in Tianjin, China during April 27 and May 5 attracts a total of 11 teams to vie for the top honour. China, hosts and third place at the previous edition in Kazakhstan last year, are in Pool A with Kazakhstan, Iran, Hong Kong China and Chinese Taipei, while reigning consecutive two-time champions Thailand, Japan, Vietnam, DPR Korea, Sri Lanka and Turkmenistan are in Pool B.

In the 3rd Asian Women’s U23 Volleyball Championship in Hanoi, Vietnam from July 13 to 21, a total of 15 teams confirmed their participation, with hosts Vietnam, New Zealand and Turkmenistan in Pool A. Pool B consists of Thailand, silver medallists at the previous edition, Australia, Maldives and DPR Korea, while Chinese Taipei, Iran, India and China are in Pool C. Pool D comprises Kazakhstan, Hong Kong China, Sri Lanka and Macau.

In the remaining two events, the 20th Asian Senior Women’s Volleyball Championship in Seoul, Korea from August 17 to 25 and the 20th Asian Senior Men’s Volleyball Championship in Tehran, Iran between September 13 and 21, will serve as a qualification event for the Asian Olympic Qualification Tournament from January 6 to 12, 2020.

Top eight teams apiece from the Asian Senior Men’s and Women’s Championships will make the cut for the afore-mentioned tournaments (respective less-ranked teams in the Asian Seniors will replace the teams qualified for the Tokyo Olympics earlier through the six-group FIVB Intercontinental Olympic Qualification Tournaments).

In the 20th Asian Senior Women’s Championship, hosts Korea, Iran and Singapore are in Pool A, while defending champions Japan, Kazakhstan, Australia and India are in Pool B. Pool C comprises Thailand, second place at the previous edition in the Philippines two years ago, Chinese Taipei, New Zealand and Hong Kong China. Powerhouses China, Vietnam, Indonesia and Sri Lanka are in Pool D.

Updates on important information including match schedule will be soon posted on the AVC website.