Hamburg, Germany, June 4, 2019 – Starting at 12.00 CEST/10.00 GMT, the pool assignments for the 2019 FIVB Beach Volleyball World Championships will be decided at a drawing of lots ceremony to be held  at Hamburg City Hall. The draw will be streamed live on fivb.com.

With the pool assignments for the top 12 teams per gender announced on May 27, Tuesday’s draw will complete each group’s make-up of four pairs each for the 10-day, 216-match event starting on June 28 at the Rothenbaum Stadium and concluding on July 6 with the women’s finale and July 7 with the men’s gold medal match.

The seedings for the drawing for lots were determined by combining each team member’s best four finishes among a player’s last six FIVB World Tour and/or confederation events over a 365-day period from May 27, 2018 through May 26, 2019. 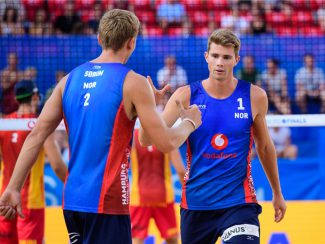