Hamburg, Germany, June 4, 2019 – With the start of the competition 24 days away, the men’s and women’s pool placements for the 2019 FIVB Beach Volleyball World Championships were determined here Tuesday during a mid-day drawing of lots.

The drawing of lots determined the 12 pools of four teams each per gender for the $1-million FIVB Beach Volleyball World Championships to be played from June 28 through July 7. The 12th edition of the event will be staged at the Rothenbaum Stadium where the international beach volleyball circuit has staged tournaments the past three seasons.

The top spots in Pool A through Pool L were determined by FIVB seeding points 31 days (May 27) prior to the start of the competition. The top host country women’s team will be Sandra Ittlinger/Chantal Laboureur, who will be the top pair in Pool A along with pairs from Italy, Canada and Paraguay.

Due to its host country role, the Germany pair of Julius Thole/Clemens Wickler were seeded No. 12 in the men’s competition and will be listed as the top team in Pool L. Competing in the same group with the top Germany men’s team are pairs from the United States, Iran and Rwanda. 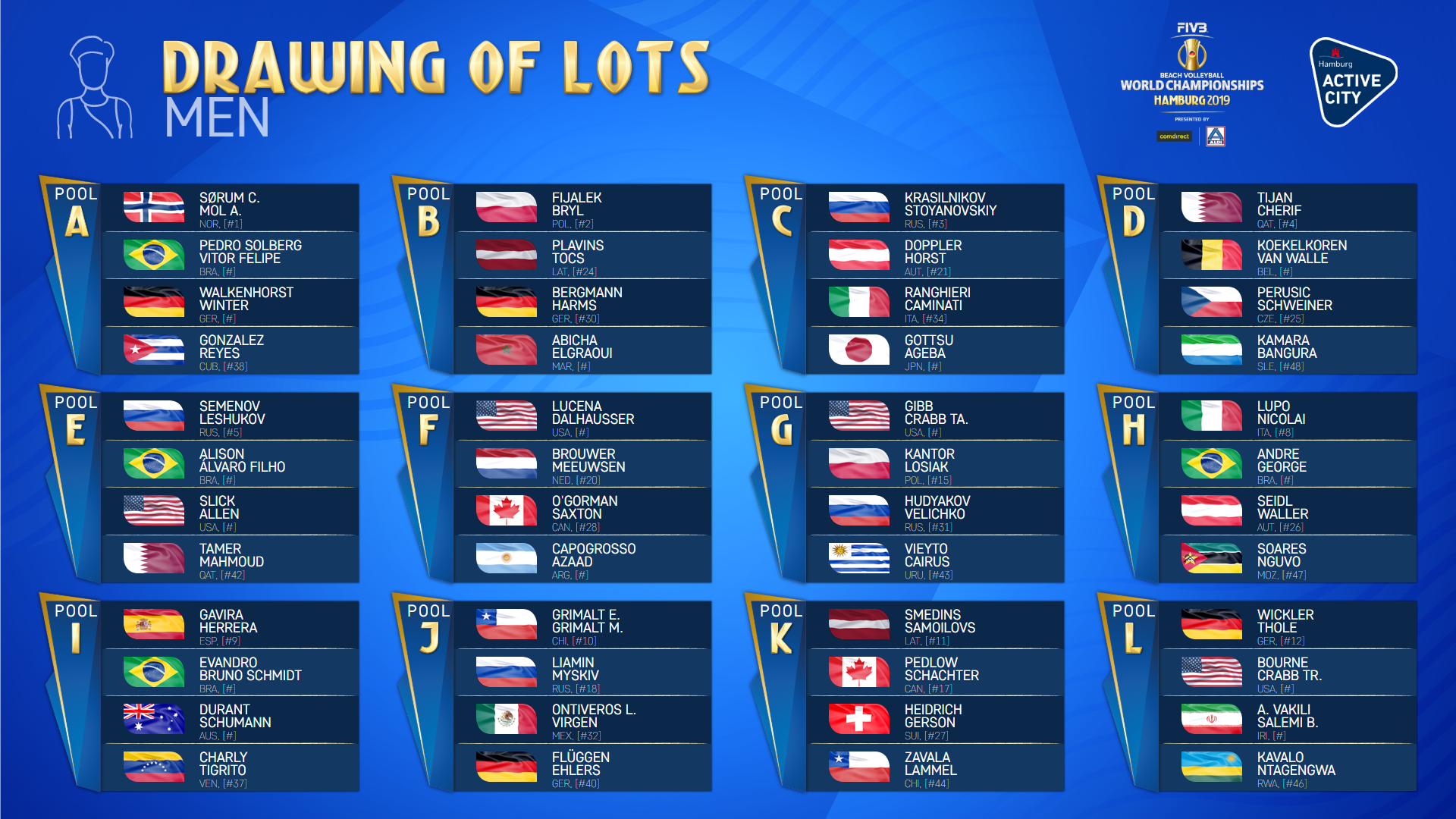 Anders Mol and Christian Sorum of Norway, the No. 1 seeded men’s team with four FIVB gold medals this season and seven FIVB Beach Volleyball World Tour titles in the last 11 months, headline Pool A along with Vitor Felipe/Pedro Solberg of Brazil and duos from host Germany and Cuba. Solberg and Evandro Goncalves captured the bronze medal at the 2015 FIVB World Championships in the Netherlands. 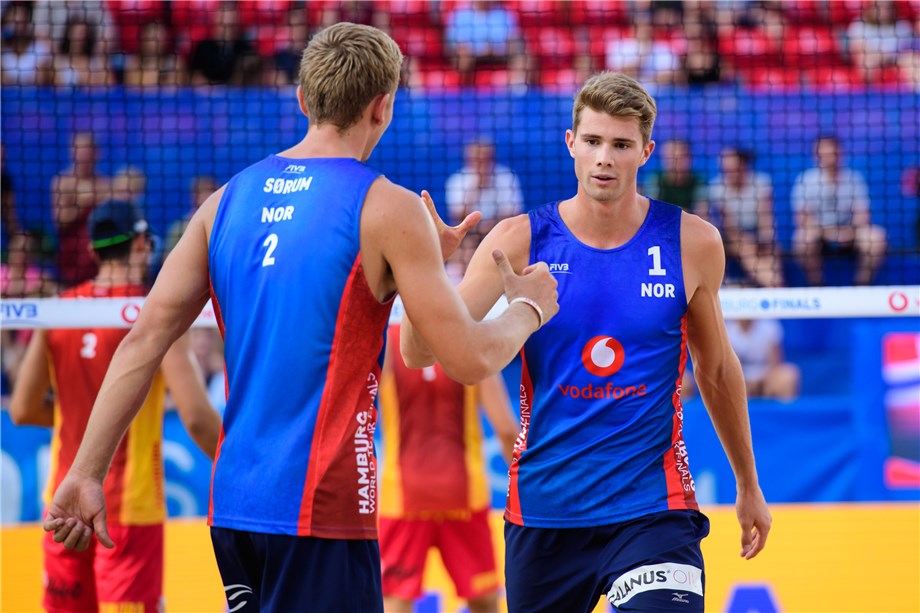 With Germany hosting the event for the second time, the medal matches for the 2019 FIVB World Championships will be on July 6 for women and July 7 for men. The winning men’s and women’s teams will split the $60,000 first place prizes. Berlin hosted the 2005 edition of the World Championships where Brazil’s Marcio Araujo/ Fabio Luiz Magalhaes and Americans Misty May-Treanor/Kerri Walsh Jennings claimed gold.

The only World Championship winning men’s team in the 2019 field are Dutchmen Alexander Brouwer and Robert Meeuwsen (Stare Jablonki 2013), who also captured the bronze medal at the Rio 2016 Olympic Games. Placed in Pool F with American Olympians Phil Dalhausser/Nick Lucena, Brouwer and Meeuwsen will also play teams from Canada and Argentina in their group.

With a new World Championship team to be crowned in 2019, one half of the gold medallists from the 2017 FIVB World Championships in Vienna is competing this year in the person of German Laura Ludwig. After winning the Rio 2016 Olympic gold medal together, Ludwig and Kira Walkenhorst topped the Vienna World Championship podium by defeating American Lauren Fendrick and April Ross in the finals. 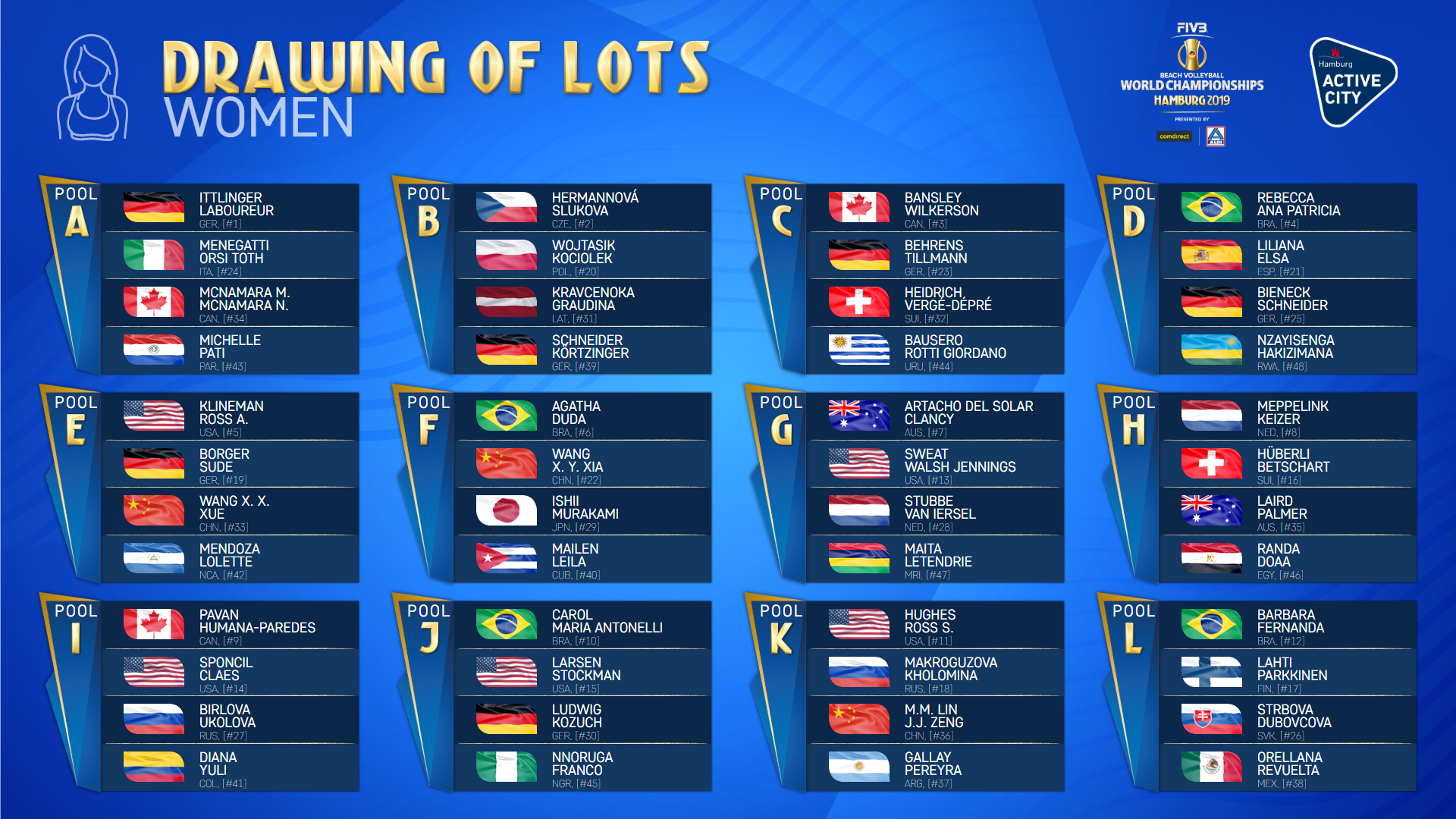 Ross, who is competing in Pool E this year with Alix Klineman, has competed in three World Championship final fours highlighted by a gold medal at the 2009 Stavanger Worlds with Jen Kessy. Following a silver medal with Kessy at the London 2012 Olympic Games, Ross teamed with Whitney Pavlik to place fourth at the 2013 Worlds in Poland after losing the bronze medal match to Liliane Maestrini/Barbara Seixas of Brazil.

Ludwig and new partner Margareta Kozuch have been placed in Pool J with Maria Antonelli/Carolina Salgado of Brazil along with pairs from the United States and Nigeria.  Antonelli captured the bronze medal at the 2015 World Championships in the Netherlands with Juliana Felisberta. 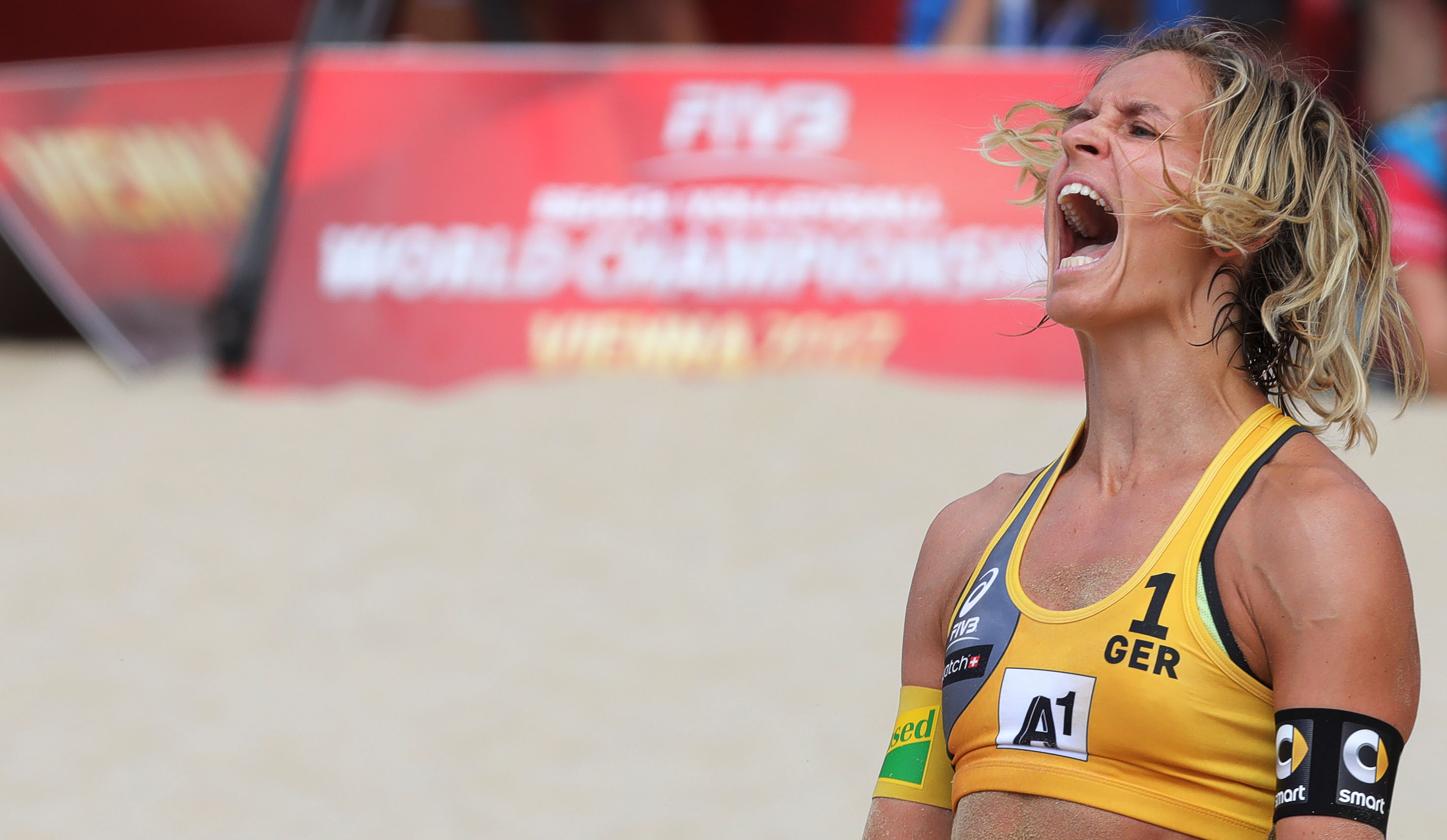 Evandro and Bruno are in men’s Pool I with Spaniards Adrian Gavira/Pablo Herrera and pairs from Australia and Venezuela. Andre and George were placed in Pool H with Daniele Lupo/Paola Nicolai of Italy, the Rio 2016 Olympic silver medal winners, along with duos from Austria and Mozambique.

The Brazilian pairs of Alison Cerutti/Bruno Oscar and Agatha Bednarczuk/Barbara captured the men’s and women’s gold medals at the 2015 FIVB World Championships in the Netherlands and are playing with different partners.

Alison, who also captured the 2011 World Championship title with Emanuel Rego in Rome, and new partner Alvaro Filho compete in Pool E along with Russians Konstantin Semenov/Ilya Leshukov and tandems from the United States and Qatar. Alvaro earned a World Championship silver medal in Poland with Ricardo Santos as the pair lost to Brouwer and Meeuwsen in the Stare Jablonki finale.

After winning the silver medal at the Rio 2016 Olympic Games after dropping the Copacabana finale to Ludwig and Walkenhorst, Agatha and Barbara split. Agatha and Eduardo ‘Duda’ Lisboa headline Hamburg Pool F and will play pairs from China, Japan and Cuba. 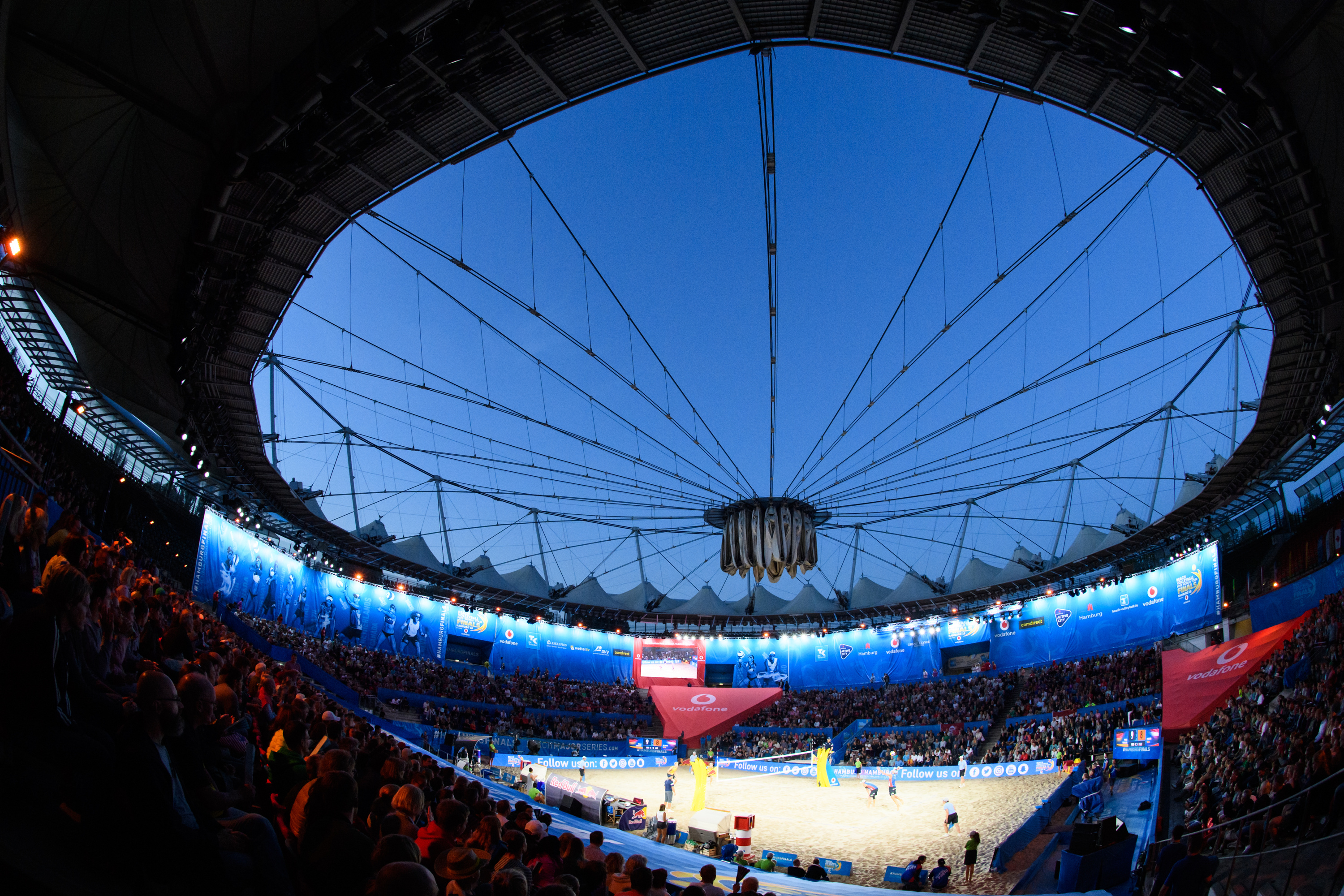 China’s Chen Xue also returns to the World Championships after winning the 2013 gold medal in Poland with Xi Zhang. A bronze medal winner at the Beijing 2008 Olympics and fourth-place finisher at the London 2012 Summer Games with Zhang, Xue is playing in Pool E with Xinxin Wang.

Following the completion of pool play, the top two pairs in each group will advance directly to the 32-team elimination bracket along with the four best third-place duos based on match points, set-point ratios and/or rally-point ratios.  A lucky loser round for the teams ranked fifth through 12th will be played with the four winners advancing to the elimination bracket. 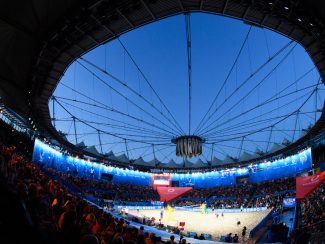 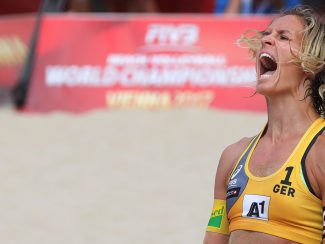 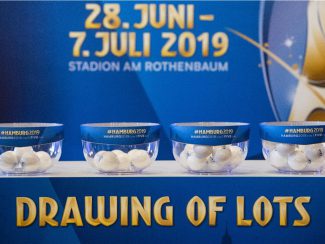