For the first time ever the thrilling elimination race in beach volleyball will be played on the southern hemisphere with stops in Itapema, Brazil and Australia. Home of King of the Court, the Dutch city of Utrecht, is of course back in the tour and for the second year in a row the beach volleyball Walhalla of Hamburg, Germany will feature a big event. The Crown Series will be concluded with the King of the Court Finals 2022 in Doha, Qatar.

The new tour, the 2022 Crown Series, will commence in June. The first stop along the way is Hamburg (June 23-26) where we will organize an international event for the second year in a row! Last year the tournament in the Stadion am Rothenbaum was a great success. This year we will take it up a notch and build our iconic skybox Stadium in the city center! This will be a can’t-miss-event!

Same goes for Utrecht. For the third year in a row and fifth time in total players will visit the home of King of the Court. From September 6 till 11 the Jaarbeursplein will host once more the iconic skybox stadium. It will be larger than ever before, with a total of up to 1,000 visitors per session.

New on the tour is Itapema, Brazil. From November 2 till 6 the beautiful beach resort in the Southern part of Brazil, that has played host to several World Tour stops, will now feature as the first international King of the Court tournament to be held on the southern hemisphere and the first-ever in Latin-America. Last January in Doha a three-year deal was signed, we can’t wait present our fans there with the best King of the Court players on the planet.

As a tribute to the amazing fanbase of King of the Court in Australia, we are going Down Under! At the beginning of December (1-4) Australia is the fourth stop on the King of the Court Crown Series 2022. On the back end of the FIVB Beach Pro Tour tournaments in November Australia will host its first King of the Court tournament. We are proud to announce we have signed a minimum three-year deal with Volleyball Australia! Over the coming months we will, together with our partner and local sponsors, decide where the tournament will take place.

January 11-14, 2023 will mark the annual King of the Court Crown Series Finals. For the second time in a row the King of the Court season will be concluded at the Aspire Zone in Doha, Qatar. The best performing teams will travel to the Middle East for the final quest to the ultimate crown of the 2022 season. An added bonus: teams will be able to have their training camps there as well to prepare for the 2023 season.

The King of the Court Crown Series 2022 will be unprecedented. Five tournaments, a total of four continents visited, a total of $500,000 in prize money and millions of fans from all over the globe that can experience the best beach volleyball action ever seen!

The game of King of the Court keeps building and improving. The world has experienced what the big international events are all about, but King of the Court is a game that should be played on all levels. To unlock the full potential of development, we have decided to create a platform for promoters that provides all necessary tools to organize King of the Court tournaments from amateur, through national up to international level.

We helped to organize several national championships and we are now also receiving many requests from clubs for amateur level events. We are on the right path to make an impact on local and national level in the upcoming years. As the National championships played last year ended up as huge successes, we would now like to offer this product to all countries, including yours. We offer you to organize a King of the Court National Championship in your country. 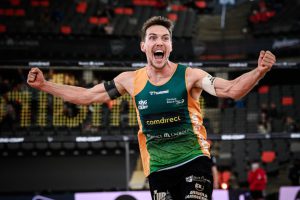 The innovative beach volleyball event King of the Court has its first stop in Hamburg – From June 23 till 26 the best of the best travel once again to Germany to fight for the titles of Queens and Kings of Hamburg. This year marks the start of the five stop global Crown Series.

King of the Court Trailer to embed: https://youtu.be/LSfMbW-Xrg0 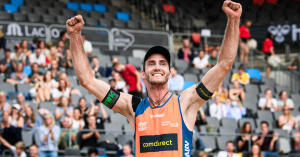 In the men’s tournament eight former international Kings will take to court. Piotr Kantor (POL) is the reigning King of Hamburg, Ahmed and Cherif still proverbially wear the Doha crowns. Alexander Brouwer and Aleksandr Samoilovs haven’t missed a King of the Court event so far, they will go for glory in their tenth tournament.

Lots of familiar faces will start the hunt for the crown on the women’s side. We have the German Queen from 2021, two Dutch queens and three Queens from previous international tournaments, including the winners of the King of the Court Finals 2021 in Doha; Sandra Ittlinger (GER) and Isabel Schneider (GER). Apart from those teams several Queen of the Court regulars will take the stage in the Active City Arena.