One of the best teams in the men’s Volleyball Nations League 2022 so far, Japan worked hard to add another victory to their total on the third day of the second week of the tournament, in Quezon City, the Philippines.

The Japanese now rank third in the standings with five wins in six matches, the same record obtained by each of the four teams that are currently placed from first to fourth in the tournament – France, Poland, Japan and the USA.

Explosive opposite Yuji Nishida came up big for his team, producing a match-high 28 points, with 22 kills, five aces and one block. He was also important as a source of points in key moments of the match. In the first set, the opposite hit from the backcourt to send the ball to the corner of the Italian court and score the final point in the 25-20 Japanese victory.

Team captain Yuki Ishikawa also had a productive match, leaving the court with 20 points after he tallied 14 kills and a match-high six aces. Middle blocker Akihiro Yamauchi was the other Japanese player to reach double digits in scoring with 15 (14 kills, one ace).

“Serving was really important for us today, but also our blocking and defense,” Ishikawa said after the match. “The crowd was great and pushed us the entire time. We wouldn’t have made it without them and their energy.” 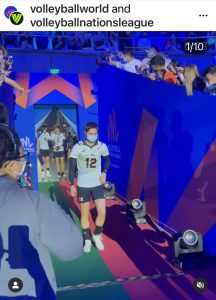 On the Italian side, outside hitters Daniele Lavia and Alessandro Michieletto, who were playing in just their second match in the VNL 2022, led the way with 22 (18 kills, three blocks, one ace) and 16 (14 kills, two blocks) points respectively.

On Saturday, the Japanese will face reigning Olympic champions France at 15.00 local time (7.00 GMT). On Sunday, they complete their schedule in the second week of the VNL against Slovenia at the same time.