Defending champions Serbia alongside joint hosts the Netherlands and Poland will lead a pack of 24 teams that were confirmed to participate at the 2022 FIVB Volleyball Women’s World Championship, following the conclusion of all continental championships that were qualifiers for the flagship FIVB event. 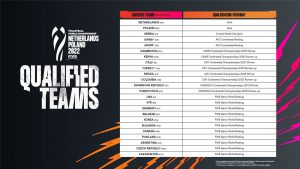 Cameroon and Kenya from Africa, alongside Brazil and Colombia from South America were the last two teams to grab spots through the continental championships. 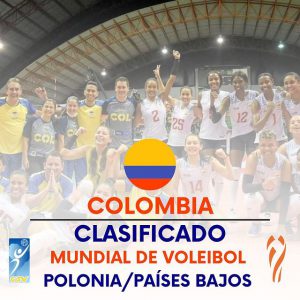 Earlier this month, Italy and Turkey had confirmed their participation via the European Championship – the latter with their third-place finish as silver medallists Serbia had already qualified as defending champions – while the Dominican Republic and Puerto Rico had advanced through the NORCECA (North & Central America and Caribbean) Championship. 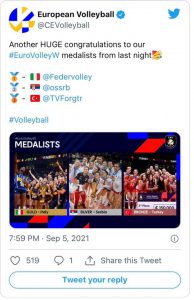 The 24-team lineup was then completed with the top 11 teams of the FIVB World Rankings – amongst those not already qualified through other paths.

The list includes all previous gold medallists except for Cuba, but also features one team, Colombia, who will be making their debut in the competition.

*Teams qualified through the AVC Senior Continental Ranking – Women since the Continental Championship was canceled due to the COVID-19 pandemic.
**Third place team qualifies as a not yet qualified team, as Serbia had already qualified as world champion.