Action got underway with Poland and Russia facing off as the back-to-back world champions sought to improve on their run of two wins in the Finals by taking on last year’s VNL winners Russia.

Poland coach Vital Heynen stuck with a young team and formula which saw the red-and-whites begin successfully in the 2019 VNL Finals with victories against Brazil and Iran. It was Russia, however, who took an early lead at 11-6 and kept their momentum going to claim the first set 25-19.

Poland’s inaccuracies gave Russia another early lead in the second set as coach Tuomas Sammelvuo’s men moved to 6-2. A Karol Klos Monster Block looked like it could re-energise the world champions, who worked their way back to 6-all. The Poles kept believing in their chances and a Bartosz Bednorz ace gave them the lead for the first time at 23-22, before they won the second set at 26-24 to the crowd’s cries of ‘Polska!’

It soon became obvious both teams were playing to stay in the match in set three with points exchanged and level at 7-7 then 11-11. Could Bednorz again provide the spark for Poland as he put in a Super Spike at 13-11? It was not to be: Russia claimed their second set of the match 25-22.

Russia held on to their momentum in the early points of the fourth set. A Klos Super Spike brought Poland back into the game at 6-7 before the red-and-whites put in a Monster Block, again from Klos to level at 7-7, electrifying the crowd with stunning back-to-back winners. Russia reacted immediately, however, taking the lead and looking increasingly difficult to catch at 17-13, with an Egor Kliuka ace at 20-13. It was soon over at 25-21 in favour of the reigning champions.

In the second semifinal of the day, hosts USA were cheered on by an enthusiastic home crowd as last year’s bronze medallists took on Brazil coming off two five-set matches, including a defeat to Poland and victory against Iran.

As expected in a match between two powerhouses of the men’s game, the match got off to a quick start with USA holding on to a small lead before Taylor Sander hit a winner at 21-17 to claim a more significant advantage. The first set fell to the hands of coach John Speraw’s players at 25-17.

USA began the second set where they had left off the first with Sander claiming the first point on a spike. Brazil were up for a challenge, however, and matched their opponents point for point in the opening exchanges of the set. A Yoandy Leal ace gave Brazil set point, which they won at 25-17.

Max Holt had a monster block at 2-2 in the third set but Brazil were still raking in the points. It was still close at 23-21 in favour of Brazil, but the visitors held on to the advantage to claim set point and then the set at 25-21.

The fourth frame again began with the South Americans in the lead at 6-4. In a repeat of the second and third sets, coach John Speraw’s men trailed their Brazilian rivals by a couple of points until scores were levelled at 9-9. USA then took the lead at 11-10. Wallace’s spikes and a Lucas Saatkamp Super Spike kept Brazil in contention, but USA continued to build on their advantage at 15-13. Micah Christenson hit an ace at 21-17 and the United States held on to win the set at 25-20.

Leal opened scoring in the fifth set with a spike, but were the Brazilians beginning to feel the five set matches played earlier this week? Taylor Sander put USA three points clear at 8-5 and at 10-5 it looked like USA were well in control of the tiebreaker. Brazil won a Mega Rally at 7-12, but it was too little too late as USA claimed the set and match at 15-9.

The top scorers included Matt Anderson (22) and Sander (17) of USA, and Wallace De Souza (17) and Yoandy Leal (16) for Brazil. Scoring 10 points during the match, Brazil’s Ricardo Lucarelli became the competition’s third best scorer with a total of 205 points. 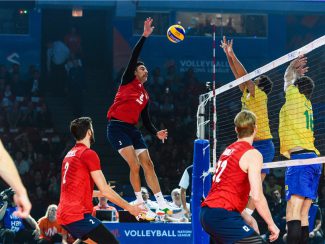