See the composition of the 12 pools per gender

The 12 women’s and 12 men’s pools for the first phase of the FIVB Beach Volleyball World Championships Rome 2022 were drawn in Jurmala on Tuesday to set the stage for an exciting competition in the Italian capital from June 10 through 19.

With the first whistle of beach volleyball’s highlight event of the year now less than 10 days away, the participating teams found out who their opponents for the first three matches at Rome 2022 will be.

The 48 teams per gender were distributed into 12 round-robin pools of four duos each. At the end of the pool phase, the top two teams in each pool and the best four third-placed pairs will advance to the elimination rounds. The remaining eight teams that rank third in their pools will play a four-match lucky-loser round to complete the 32 teams in the knockout bracket. The entire tournament will feature 216 matches across 10 days of competition.

“It is going to be a tough pool. The level is even and anybody can win against anybody. We should not underestimate anyone, so we’ll just do our best,” said Italy’s Alex Ranghieri, who took part in the draw ceremony together with his partner Daniele Lupo. “In 2011, Daniele and I were supposed to play at the World Championships in Rome together, but I got injured. 11 years later, I will be playing my first event in Rome, so let’s make it magical!”

“I think we have a strong pool. We have two really good teams and one that we are not familiar with. So it’s going to be a great start,” commented Latvia’s Anastasija Kravcenoka right after taking part in the draw along with her teammate Tina Graudina.

“It’s hard to tell which pool is the toughest, maybe Pool J… I’ll have to look closer, but obviously every pool has really good teams in it and I think that there will be a lot of surprises at this tournament,” Graudina added.

The 13th edition of the World Championships will be played at the Foro Italico in Rome. Tickets for the event are already on sale and fans can reserve their seats to watch the best teams in the world compete at the iconic venue. 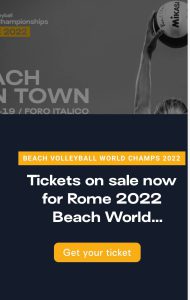