Bangkok, Thailand, December 2, 2021 – 2022 turns out to be a very busy year for AVC and its Affiliated National Federations when 10 top-tier Championships have been confirmed by the continent’s volleyball-governing body to be held next year.

It is necessarily required that each federation submit the National Entry Forms before the deadline on January 15, 2022. However, the late submission (until January 21, 2022) is possible, but could result in a fine of US$500.

In the attached emails, AVC also informed all Federations that the AVC Challenge Cup (both in the men’s and women’s events) will be organised only for lower-ranked teams ineligible for the top-flight AVC Cup.

According to the 2022 AVC Competition Calendar, the season-opening tournament will take place between April 24 and May 1 in Semey, Kazakhstan, where participating teams will test their mettle in the 2022 Asian Women’s Club Volleyball Championship to vie for the lone berth on offer for the FIVB Volleyball Women’s Club World Championship 2022.

Both Championships will serve as the qualification tournaments for respective FIVB Volleyball Women’s U18 and U20 World Championships 2023.

The Philippines, which were due to host the 21st Asian Senior Women’s Volleyball Championship in 2021, but it was cancelled due to an increase of cases amidst the COVID-19 pandemic, will play host to the 7th AVC Cup for Women in Manila from August 21 to 28.

After that, Hong Kong, China will organise the 3rd AVC Women’s Challenge Cup between August 22 and 28, followed by the 21st Asian Men’s U20 Volleyball Championship in Riffa, Bahrain from August 22 to 28, which will serve as the qualification tournament for the FIVB Volleyball Men’s U21 World Championship 2023.

The season-closing tournament will take place in Kyrgyzstan, with the 3rd AVC Men’s Challenge Cup being held in Cholpon-Ata from August 28 to September 4.

In addition, the Senior Men’s and Women’s Volleyball Championships and various Age-Group Championships in AVC Zonal Associations are also expected to take place in 2022, while the continent’s biggest multi-sport events, the 19th Asian Games, have been confirmed to be held in Hangzhou, China from September 10 to 25. 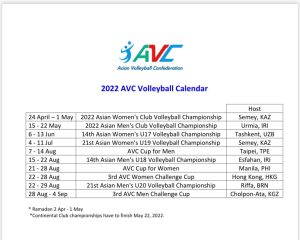