ADDITIONS AND CHANGES TO 2021 BEACH VOLLEYBALL CALENDAR ARE CONFIRMED

The European Volleyball Confederation (CEV) has confirmed the addition of four events, 1 and 2-star, to the FIVB World Tour 2021 calendar to provide further opportunities for athletes to compete on an international stage.

The international beach volleyball will return to Montpellier, France with a men’s event running from August 24-29. Additionally, the Czech Republic city of Brno, which has hosted numerous age-group beach volleyball European championships over the past decade, is due to host a women’s 2-star event on August 26-29, which further demonstrates the popularity of the sport in this nation.

The Italian seaside resort of Cervia will welcome a 1-star double-gender event in late August or September with the exact dates to be confirmed at a later stage. In addition, Madrid, Spain will host a World Tour 1-star event for the first time with a women’s tournament set to take place on September 16-19. This will be the second international beach volleyball event held in Madrid in 2021 as the Spanish capital is among the cities due to host the second phase of the CEV Continental Cup in early May. This World Tour stop will further raise the role of Madrid as an international beach volleyball hub and help promote the sport in Spain.

Meanwhile, with the confirmation received from CEV, the FIVB has accepted a request from the local organisers to postpone a 2-star event in Prague, Czech Republic, from late May to after the Olympic Games Tokyo 2020, and the event will now be held on August 19-22, 2021. Following the re-scheduling, this double-gender event will provide teams and fans with even more opportunities to compete and enjoy beach volleyball of the highest quality. 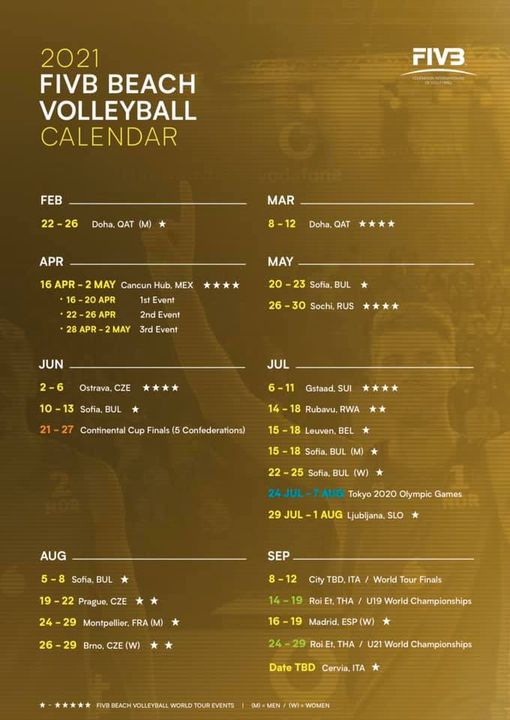 ATHLETES TO RECEIVE DAILY COVID-19 TESTS DURING TOKYO GAMESANDERS MOL AND CHRISTIAN SORUM CONTINUE GLITTERING, WITH QATAR NOT FAR BEHIND