Bangkok, Thailand, October 23, 2020 – Al-Rayyan and Al-Arabi qualified for the semi-finals of the 42nd edition of the Amir Volleyball Cup for 2019-2020, Qatar Volleyball Association reported on volleyball.qa on Wednesday.

During the competition, the QVA was also keen to implement strict precautionary and health measures in order to protect everyone from the COVID-19 as they subjected all players, referees, administrators and staffs to a medical examination in the management and organization of these matches.

The quarter-finals began on Tuesday which saw Police and Qatar earlier qualify for the semi-finals, with the former cruising past Al-Khor 3-0 and the latter struggling to beat Al-Ahli 3-2.

The semi-final encounters see Police go up against Qatar and Al-Arabi challenge Al-Rayyan in the best-of-three format.

The first round of the semi-finals will be held on October 24 and the second meet on October 26. In case two teams in each semi-final match are tied (win 1, loss 1), a playoff match will be held to determine the winning team in the final showdown on October 31. 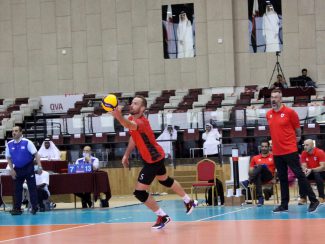