Competing together for the first time since February 2017, Fendrick and Hughes posted a 2-0 (21-13, 21-6) gold medal win in 36 minutes over 15th-seeded Terese Cannon/Kelly Reeves in the 23rd All-American women’s finale on the FIVB World Tour since the start of sanctioned events in August 1992.

With their fifth-straight victory after dropping their opening pool play match Friday to 24th-seeded qualifiers Traci Callahan and Crissy Jones of the United States, Fendrick and Hughes shared the $4,000 first-place prize while Cannon and Reeves split $3,000 for placing second in their first FIVB World Tour start together.

In the bronze medal match, fourth-seeded Yurika Sakaguchi and Chiyo Suzuki of Japan scored a 2-0 (21-18, 21-18) win in 38 minutes over 16th-seeded Sofia Bisgaard and Cecilie Olsen of Denmark.  The victors shared $2,000 for placing third as Sakaguchi and Suzuki have now won six World Tour medals in 15 FIVB starts together.

The men resume play February 20-23 with a Cambodian stop in Phnom Penh.  The men will also compete in Malaysia, Australia and Mexico along single-gender stops in Iran (March 3-7 at Bandar Abbas) and Qatar (March 12-15 at Doha). 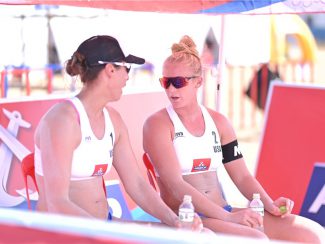 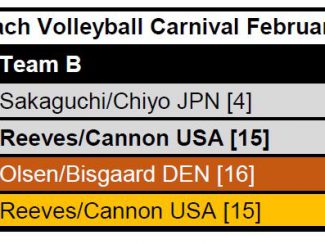