Doha, Qatar, October 16, 2019 – United States it is! The first in history beach volleyball 4×4 gold medals from an FIVB-sanctioned event, ANOC World Beach Games Qatar 2019, went to Alexandra Wheeler, Emily Hartong, Geena Urango, Karissa Cook, Katherine Spieler and Kelly Reeves and their coach Phil Noyes. The national team of Brazil claimed the silver, while Canada settled for the bronze, as the medal matches took place on Wednesday at the Katara Beach in Doha.

As the first set of the gold medal match progressed in front of the packed stands at the beach volleyball stadium in the Qatari capital, the Americans took the lead. As the gap gradually widened they gained more and more confidence. Unimpressed by the big names on the other side of the net, they cruised comfortably to a 21-16 close, shaped up by a Geena Urango for the winning point. The second set was completely one-sided. Riding on the momentum, the team of USA established complete control on the court and broke away to a 21-9 win, with setter Karissa Cook blocking successfully for the last two points. Cook (5 spikes, 5 blocks) and Emily Hartong (6 spikes, 4 blocks) were the best scorers of the match with 10 points apiece.

“We came in with zero expectation, because we knew how good Brazil were from pool play. They beat us pretty well earlier this tournament, so we just came in thinking, ‘we’ll have some fun, we’ll make a couple of changes, take a lot of risks and see what happens…’ And it worked!” happy Karissa Cook said upon the victory. “We started running a faster offence. We kind of stole that from our men’s team. That got us with fewer blockers up, which helps. It feels amazing and I think I am speaking for everyone! We are extremely excited! Hopefully, there will be more 4×4 tournaments and this isn’t the last time we can be on the podium for it.”

“We are happy about this tournament. It was a really good experience for us,” commented Brazil’s Barbara Seixas. “Unfortunately, in this game we did not do our best. We tried, but we made a lot of mistakes and the Americans made a great match as well. Every medal has to be celebrated, but I wish we could have done better. But I think we have to be proud to have come this far. 4×4 was a new challenge for us and I have to congratulate our girls for their hard work.” 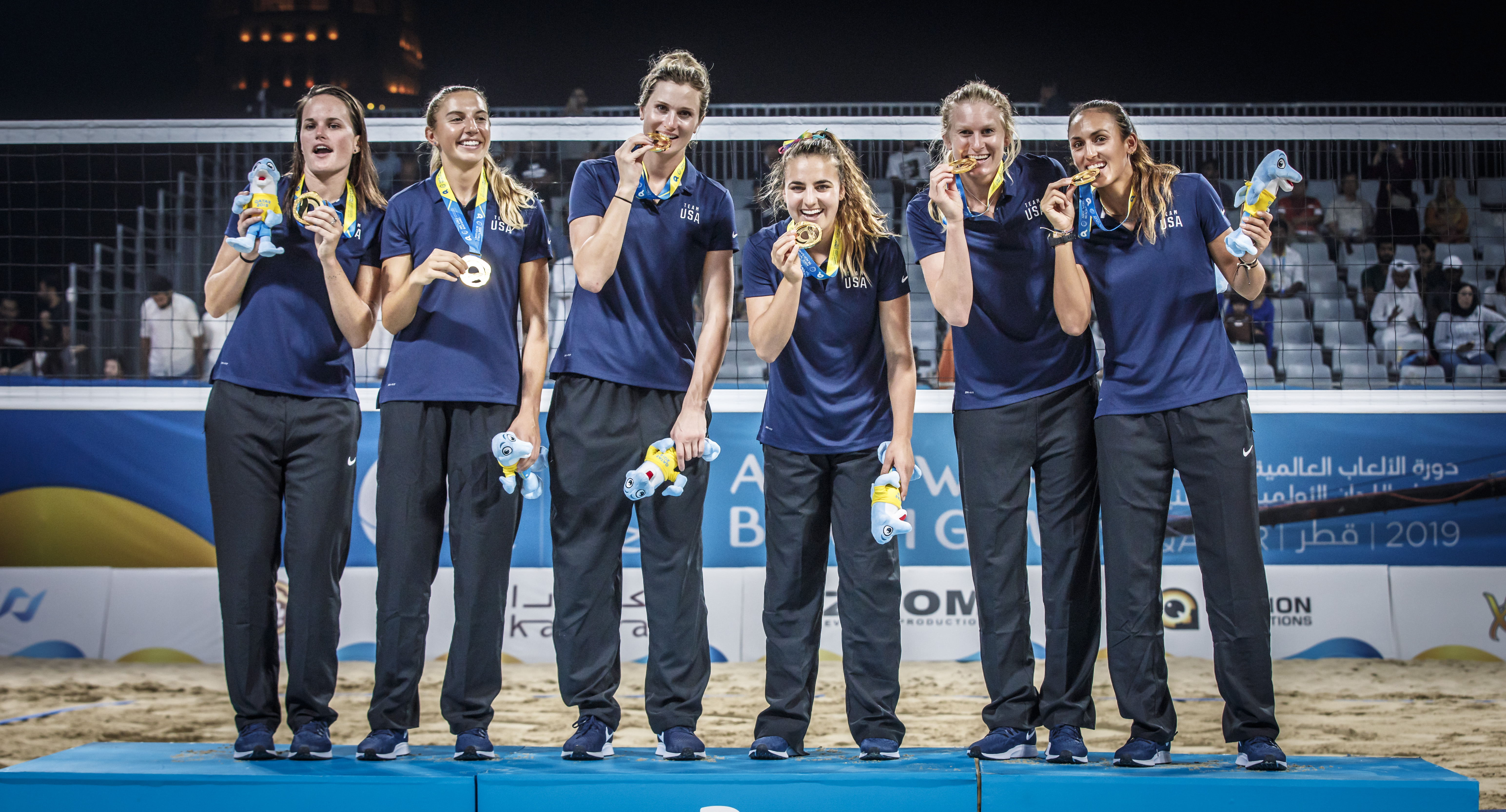 Australia opened a solid lead early into the first set of the bronze medal match against Canada. The North Americans fought back with Camille Saxton spearheading their offensive efforts, but managed only to get back within one. The Aussies held up and Stefanie Weiler closed it off at 21-17 with an ace, her second for the set. Eager to restore the balance, Canada stormed into the second set on a 10-2 run and never looked back – 21-15. The side-switch in the tie-breaker came at 8-4 Australia’s way, but Canada restored the tie at 9-9 on a monster block by Saxton. A spectacular long rally gave the North Americans match point at 14-13. On their second opportunity to pocket the win Saxton hammered it on the sand for 16-14. She also became the best scorer of the match with 19 points to her name.

“That’s why I love this game so much! You never know what’s going to happen,” exclaimed an elated Canadian setter Victoria Cowley after the game. “It’s all about being able to adapt, be resilient and believe in yourself no matter what. I am just so proud of us and our team and what we’ve accomplished being here. Two-on-two is hard, six-on-six is hard, but four-on-four might be the most difficult. I am going to take away the friendships that I’ve made and the connections that we have with one another during the match. To be able to come together and achieve something like this is really special and I’m sure we’re going to remember it for a long time.” 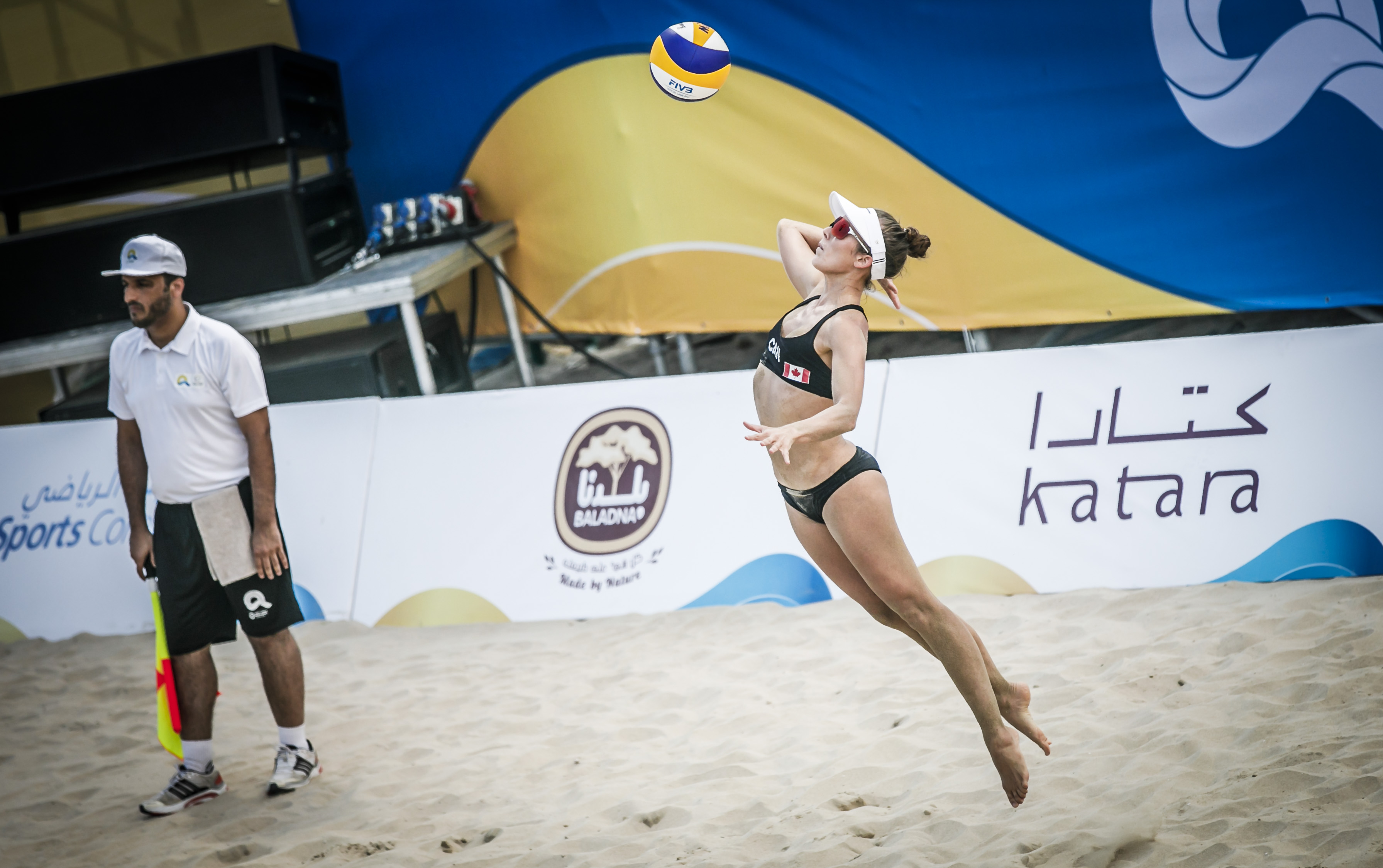 AMERICANS TRIUMPH WITH MEN’S 4X4 GOLD, AS HOSTS QATAR AND INDONESIA CLAIM SILVER AND BRONZEINDIA AND PAKISTAN CONTINUE TO GROW WITH SUPPORT FROM FIVB