ARTACHO DEL SOLAR/CLANCY RISE TO NO. 2 IN WORLD RANKING

Canberra, Australia, June 25, 2019 – Australia’s Mariafe Artacho del Solar and Taliqua Clancy have been ranked at No.2 in the world in the lead-up to the FIVB Beach Volleyball World Championships, which get underway this weekend in Hamburg, Germany.

Mariafe and Taliqua have had an incredible run of success this year and head into the world’s following victory in the FIVB 4 Star World Tour Event in Poland.

They have won gold five times on the World Tour and are now one of the hot favourites for the World titles, which start on June 28 and conclude on July 7 in Hamburg.

The Brazilian combination of Agatha Bednarczuk and Eduarda Duda Lisbon have regained their position as the No.1 women’s team on the FIVB World Tour after 35-week leader heather barnsley and Bradie Wilkerson of Canada have dropped to the fourth spot on the list.

Artacho and Clancy’s rise to the second spot has featured three podium placements in five FIVB events this season highlighted by a gold medal at the last World Tour event in Warsaw where the Australians defeated Rebecca and Ana Patricia in a three-set quarterfinal match. A week earlier in Ostrava, Artacho and Clancy lost an elimination match to Agatha and Duda in three sets.

ONE TICKET, ONE OBJECTIVE AT FIVB WOMEN’S VOLLEYBALL CHALLENGER CUP 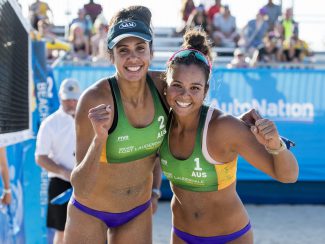