Seventy-three teams representing 24 different countries will take to the court in Torquay from November 23 until Sunday, November 27 to compete in the Volleyball World Beach Pro Tour Challenge, the first event of the Great Ocean Road Beach Volleyfest in Australia.

As the Beach Pro Tour season winds down towards the inaugural Finals in Doha, Qatar (January 26-29) and the Olympic qualification period is about to begin, new partnerships are being formed on the road to Paris 2024.

The Italian pair of Adrian Carambula and Alex Ranghieri will reunite after playing together between 2015 and 2017, when they won two gold medals on the FIVB Beach Volleyball World Tour and finished ninth at the Rio 2016 Olympic Games.

Carambula and Ranghieri are seeded at no.2 in the men’s Challenge main draw, just behind Australian reigning Commonwealth Games champions Chris McHugh and Paul Burnett.

McHugh and Burnett flew to Torquay straight from Bandar Abbas, where they claimed silver at the Asian Senior Men’s Beach Volleyball Championship just a few days ago. The Australians, currently ranked no. 18 in the world, lost a close final match against the Qatari duo of Cherif Younousse and Ahmed Tijan, who are expected to take part in the Elite16 event next week in Torquay. 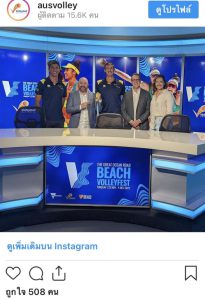 Other Australian pairs to look out for in the men’s main draw are Izac Carracher and Mark Nicolaidis, Thomas Hodges and Zachery Schubert and young Beach Volleyroos James Takken and Solomon Bushby, with 11 more Aussie teams going through the qualification round.

Overall, the men’s event includes 40 teams, of which 16 are seeded directly in the main draw. Eight more teams will advance through the qualifications round played on Wednesday 23 November to complete the 24-team main draw.

On the women’s side the event includes 33 teams, headlined by the American duo of Sara Hughers and Kelly Cheng. The no.1 seed of the Challenge will reunite four years after their original partnership ended in 2018, making a second international debut in Torquay with qualification to the next Olympic Games in their sights.

China’s Xia Xinyi and Lin MeiMei are seeded at no. 2 and will be looking to finish their season in style after having already claimed four podiums at Challenge and Futures-level events in 2022. American pair of Emily Stockman and Megan Kraft hold seed no. 3 and are also the third women’s team ranked in the FIVB world top-20 ranking to play in Torquay.

Australia has two teams in the women’s main draw, with Alisha Stevens and Nicole Laird seeded at no.10 and Georgia Johnson and Jasmine Fleming seeded at no.16.

Outside of the main draw, three-time Czech Olympian Marketa Slukova and Czech indoor talent Helena Havelkova will be on the ‘teams to watch’ list for the women’s Challenge, if they make it out of the qualifying tournament. Seven Australian teams will also go through qualification as they try to secure one of the eight spots available to complete the list of 24 who will play the pool phase.

The Great Ocean Road Beach Volleyfest will be held from 23 November to 4 December 2022 at Torquay beach with tickets starting from $5 available at https://beachvolleyfest.com.au/.

All the matches played on centre court during the Volleyball World Beach Pro Tour Challenge (23-27 Nov) and Elite 16 (29 Nov-3 Dec) tournaments will be streamed live exclusively on Kayo Freebies (kayosports.com.au/freebies).