The teams of Jack/Tim Gregory and Matthew Abela/Patrick Tang posted VolleyFest Cook Island qualifying wins over teams from Canada and Tuvalu, respectively, to advance to Wednesday modified pool play rounds in the 16-team Main Draw for the first-ever World Tour event on any South Pacific Island. 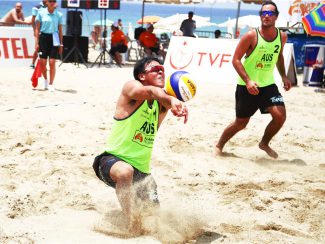