Bangkok, Thailand, January 16, 2022 – AVC is deeply saddened to learn of the sudden loss of Mr Mohammad Reza Yazdani Khorram, former president of the Islamic Republic of Iran Volleyball Federation and former AVC Board of Administration Member, who passed away on Sunday, January 16 due to a heart attack. He was 75.

Yazdani Khorram had served as the IRIVF President from 1989 to 2006 and made fundamental changes to the sport in Iran. About two decades ago, Iranian volleyball teams were unable to finish on the podium and move up the rankings despite benefiting from talented players oozing with potential. However, things started to change when Yazdani Khorram took charge of the IRIVF. He focused on youngsters and bringing them along. 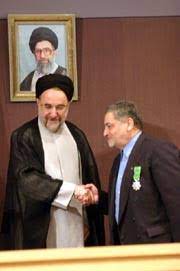 In 2004, Yazdani Khorram, one of the prominent individuals who had served the country in sport, scientific, cultural, art and managerial spheres, received the Governmental Merit and Management Badge, Type 3 Award from the then President of Iran H.E. Mr Khatami.

Under Yazdani’s leadership, the Federation had seen a series of improvements that have made it achieve the title of best Federation among all sport federations from 1999 to 2002. 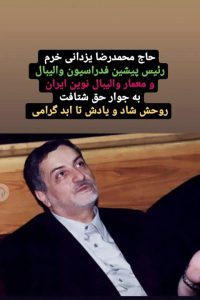 In addition, under his management, it should also be mentioned that training of 150 International level coaches, building and renovation of volleyball halls, preparing the facilities of sport establishments were in the range of his extraordinary activities. For these reasons and for his endless efforts the Council of Ministers had approved to grant him this award. It was the first medal which went to sport management.

Throughout his 15 years of managerial experience, the IRIVF had taken major steps towards expansion both in quality and in quantity and thanks to the recommendations of the then FIVB President Dr Rubén Acosta, the positive image of volleyball had been easily trusted and given confidence all over the nation.

Yazdani was devoted of our beloved sport and Iran’s volleyball had stepped to the high stages during his management.

AVC and Asian volleyball family extends deepest condolences to the Yazdani Khorram’s family, loved ones, and friends at this difficult time.