Bangkok, Thailand, September 8, 2021 – AVC is deeply saddened to learn of the passing of Mr Vyacheslav Nikolaevich Shapran, who dedicated much of his life to the successes of Kazakhstan volleyball. He died on September 8, 2021 at the age of 73 after a serious illness.

Vyacheslav Nikolaevich Shapran was born in Almaty on August 21, 1948 and graduated from the Kazakh Institute of Physical Culture and Sports in 1970. As a player, like no other, quite simply, Shapran played in the Almaty “Burevestnik.” He was part of the team which captured the USSR Championship title in 1969 aside from picking up silver medal in 1968 and 1970 and bronze medal in 1971.

He also joined the fray with his team in the European Volleyball Champions League in 1970 and 1971 when Almaty “Burevestnik” reigned supreme in both occasions. 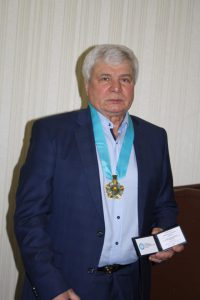 After that, he bade farewell to his career as a player and instead took up coaching, a long successful career which left an indelible mark on the history of Kazakhstan volleyball.

From 1988 to 1991, he became the head coach of the Algerian national team before moving to Tunisia to coach the Etoile team, considered as one of the best clubs in the country, between1991 and 1994.

From 2001 to 2006, Shapran had worked as head coach of the Almaty “Rakhat.” Under his strong leadership, “Rakhat” had become the champions of Kazakhstan Women’s Volleyball League for consecutive six times as well as landing the Cup of Kazakhstan and topping all challengers including China’s Bayi Yiyang High-Tech to capture the 2004 Asian Women’s Club Championship in Vietnam. Almaty “Rakhat” also emerged as the four-time winners of the Cup of the President of the Republic of Kazakhstan.

From 2000 to 2016, Shapran had intermittently headed the Kazakhstan women’s national team. He steered the Kazakhstan national team to the World Championship in 2006, 2010 and 2014. The squad also claimed silver medal at the Asian Championship in 2005 in Taicang, China apart from taking bronze in the 2012 and 2014 editions and silver medal at the AVC Cup for Women in 2016. Furthermore, he had worked as the head of the Zhetysu Volleyball Club from Taldykorgan from 2011 to 2015.

It is with pleasure that we, AVC and volleyball family recall his great achievements but also with great sadness that we acknowledge his passing. Our condolences go to his family, friends and Kazakhstan Volleyball Federation in particular.