From August 16 to September 3, fans voted to pick the official mascot of next year’s FIVB Volleyball Men’s World Championship.

Among many candidates to become the mascot of the World Championship, including fairy tale characters, a variety of animals and even weather phenomena, just three reached the finals, Bear, Tiger and Robot. Volleyball fans from around the world voted with the key battle between Bear and Tiger. In the end it was Tiger who claimed victory with 45,9% of the vote.

Fans can look forward to meeting Tiger at next year’s event in Russia, which will be played in ten host cities across the country from August 26 to September 11. Dexterity, strength and fantastic jumping skills are some of the key characteristics of Tiger, who is an Amur Tiger, an animal which is much loved and protected in Russia. 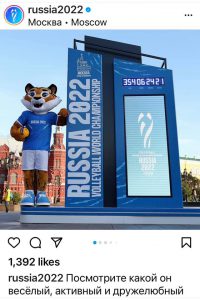 Tiger’s stripes resemble lightning bolts and represent the endless energy that will be on display at an electrifying World Championship in 2022.

The mascot’s name will be announced soon.

The voting for the official mascot of the home World Championship became the starting point for the key events prior to the tournament. It is good to know that there was a huge interest from the fans’ side, who had their say and also suggested names. One hundred and six thousand people took part in the mascot elections.

The mascot is an important part of a big sport event; organisers pay a lot of attention to making the mascot positive and recognisable, so that fans remember him for a long time. While working on developing the mascot, we had a lot of variants: fairy tale characters, animals and even some volleyball attributes. But only three of them were presented for a wider audience. Each of them was unique and included cultural characteristics and volleyball itself. Tiger – the winner – has strong connections with Russia. Many specialists are working in the Far East to save the population of Amur tigers. Our mascot is strong, dexterous, has an incredible jump and plays volleyball well – I bet he can demonstrate a top level game on the court! I believe he will become a bright symbol of the World Championship and will give lots of positive emotions to fans.