Lausanne, Switzerland, September 20, 2019 – The FIVB World Tour Council met in Lausanne to evaluate the 2018-2019 beach volleyball season and discuss preparations for the next few years.

Led by FIVB President Dr. Ary S. Graça F°, the World Tour Council listened to reports from the 2019 FIVB Beach Volleyball World Championships and the 2018-2019 FIVB World Tour season. With a total of 130,000 spectators having attended the Beach Volleyball World Championships in Hamburg this year, the packed venue and great atmosphere truly put the German city on the international sports map. The Championships showcased the best of beach volleyball to the whole world, with a huge cumulative audience of 158 million viewers worldwide, and 77 broadcasters across 112 countries.

The season finale came in Rome at the FIVB Beach Volleyball World Tour Finals, where more than 70 countries broadcast live footage from the iconic Foro Italico in Rome. Over the five-day event, Italian national broadcaster RAI showed 16 matches live and 18,500 fans were in attendance to deliver an electric atmosphere and ensure another memorable Finals. In total, the Finals generated more than 36 million impressions via the FIVB, FIPAV and Rome Beach Finals social media channels. Over 1,000 pieces of content were shared via Facebook and Instagram, registering 160,000 engaged users talking about beach volleyball.

Speaking at the meeting, the FIVB President said:

“We are proud of the success beach volleyball has had, and of course we would like to keep moving on and ensuring the best conditions for our players and fans. The next World Tour season looks very promising. We already have 40 tournaments confirmed with a total of 6.5 million USD, a very good result given that we don’t have our World Championships this season, and we still have more events to be confirmed in the upcoming weeks. The season will culminate in the Tokyo 2020 Olympic Games, an event that every beach volleyball player is hoping to be a part of.”

The 2019-2020 beach volleyball calendar will be released in the upcoming weeks, following final confirmation from each organizer.

The Council also discussed the new event structure for the beach volleyball calendar, which will come into force from 2021. The new structure is due to be announced during the Tokyo 2020 Olympic Games. 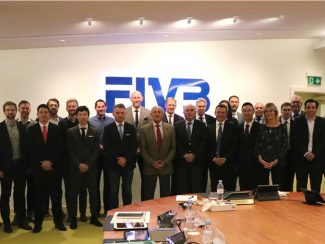