Sakai Blazers and Wolfdogs Nagoya have overtaken the Panasonic Panthers for the top spot in the Japan V.League men’s tournament rankings with their double victories, while JT Marvelous rule the women’s tournament with their eighth win in a row.

The Blazers and the Wolfdogs have posted identical 7-1 win-loss records and 20 points since their respective 3-1 losses on the opening weekend of the league. They bounced back and have kept their winning streaks going with their double victories over the weekend. 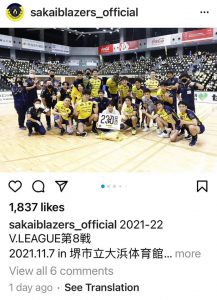 Sharone Vernon-Evans had 21 points for the Blazers in the first match, while his counterpart Thomas Edgar led all scorers with 25 points. However, Vernon-Evans’ Japanese teammates had better scoring outputs to get the team out of the tight situations in each set to complete the straight-set win.

The Canadian opposite won the scoring showdown 28-27 with the Australian high-scoring giant in the second match. The young Canadian had a solid performance in offence with 27 points from the attack line and a point from the service line, while the Australian veteran finished with 23 attacks, three blocks and an ace. 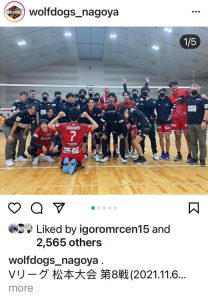 The home team missed the services of their Indonesian top scorer Rivan Nurmulki, while the visiting side got double-digit performances from their Polish superstar Bartosz Kurek who had 19 in the first outing and an impressive 30-point swing in the second one. The Wolfdogs also performed well in block as they recorded 12 and 10, respectively, against the Tridents.

The Panasonic Panthers dropped to third place after losing both their matches to JTEKT Stings. The visiting Panthers started their first match on Saturday with an opening set win, but the home team got their rhythm and gained a 2-1 edge. The Panthers succeeded in extending the match 27-25 but could not stop the Stings from scoring the win in the final set.

The Stings’ tandem of Felipe Fonteles and Kento Miyaura combined for 60 points to outscore the Panthers’ scoring duo of Issei Otake and Michal Kubiak who produced only 41 points in the five-set encounter. Even in the next outing, Lipe and Miyaura had better scoring performances than Otake and Kubiak to come up with back-to-back upsets.

Both teams have the same 5-3 win-loss cards, but the Panthers still lead with 17 points and are tied with Toray Arrows who are currently ranked fourth. 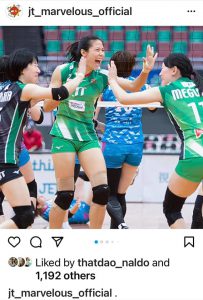 In the first match, three JT Marvelous players scored in double figures, including Annie Drews who added 10 markers to the 17-point outputs of teammates Kotona Hayashi and Yuki Nishikawa. Jana Kulan and Mayu Ishikawa were the only players scoring in double-digits for the Arrows with 20 and 12 points, respectively.

Drews drove the offence of JT Marvelous in the next match with 23 points and Hayashi added 12 to match the intensity of the Arrows’ scoring duo of Kulan and Ishikawa who had 20 and 15 points. However, JT Marvelous had an edge in attacks (55-49), blocks (8-2) and had fewer turnovers (13-20). 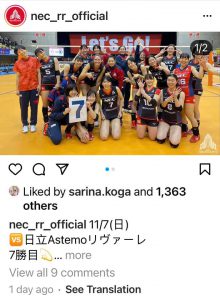 Sarah Wilhite led the Red Rockets with 17 points and gave superstar Sarina Koga a breather. Koga only came in as a substitute in the second set and was scoreless in the first match. However, she was the scoring leader in the next match with 24 points, while Rinoo Murooka led the opposing side with 21 markers.

YUJI SAEKI: “MIKASA IS PROUD OF OUR HISTORY WITH THE FIVB AND TOGETHER WE HAVE WORKED HARD TO ADVANCE THE SPORT OF VOLLEYBALL”FAB 7 SPARK EMOTIONAL SCENES IN THEIR HEARTFELT FAREWELL TO THAILAND NATIONAL TEAM AND FANS