Over a month of non-stop volleyball action will reach a climax when Bologna hosts the men’s Volleyball Nations League Finals from July 20 to 24 at the Unipol Arena. The northern Italian city will welcome the top eight teams in the competition for a final showdown which will decide who is crowned champion. 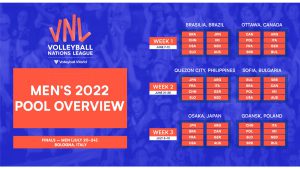 Since the inaugural edition of the VNL in 2018, Italy has organised tournaments in both the men’s and the women’s competitions, but it will be the first time that Bologna is a host.

In 2021, the entire VNL competition was held in Rimini, Italy, which means the European nation will host the men’s Finals for a second consecutive season, after Lille (France) and Chicago (USA) welcomed the best VNL teams in the first two editions of the competition in 2018 and 2019.

The event in Bologna will start with the quarterfinals on July 20 and 21 and continue with the semis on July 23. The bronze medal match and the final will follow on July 24.

The men’s Finals will take place a week after the women’s, which will be played in Ankara, Turkey from July 13-17.