Volleyroos’ libero Luke Perry is having an outstanding season in Europe, with his team Tours Volleyball (TVB) eyeing the third French top league (LAM) title in four years after reaching the finals in both the French National Cup and the CEV Cup.

Finishing runner-up in the CEV cup in particular was a major achievement for Perry, who had already played in the Final Four of the European Champions League with his former team Berlin Recycling Volleys in 2016-17, but had failed to make the Grand Final on that occasion.

Despite the accomplishment, with the burning defeat against CEV Cup champions Vero Volley Monza of Italy fresh in his mind and a national title still up for grabs, Perry is not quite ready to sit back and reflect on the positives of his season, yet. 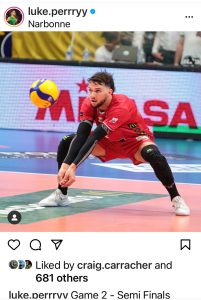 “Everyone’s saying that it’s good to get there [to the CEV Cup Final], but it was still really disappointing for us,” Perry confessed.

“I guess that maybe at the end of the season we can look back on it and be proud of how far we went.

“We knocked out a few really good teams, probably two of the top teams in the world, so that was great, but still it’s disappointing not to win,” he said.

TVB have convincingly qualified for the Final series of the LAM, after defeating Narbonne 2-1 in the semifinal playoffs, to cap an extremely positive season, despite not having a title to their name yet. 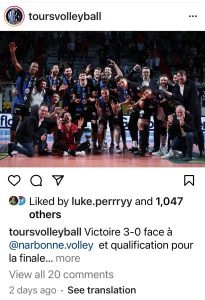 The team has dominated the LAM regular season winning 22 games out of 24 without dropping a single match on home court, and finishing runner-ups in the French National Cup too. Against a tough opponent in team Chaumont, they only conceded defeat after some dramatic and controversial final rallies in the fifth and decisive set.

“It was probably the craziest match I’ve ever been in,” Perry said. “We had literally won the final on 15-13 when the other team challenged the last point and the referee ended up reversing the call.”

That proved to be a topical moment, with Chaumont clinging back onto the game and eventually claiming the title on 19-17.

“I guess you could say that’s volleyball, but again, very disappointing to lose in the final,” Perry said. 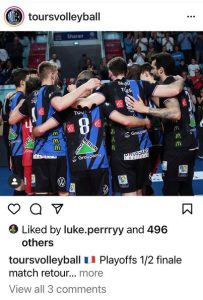 Perry joined TVB in early February 2021 on a mid-season contract and he said a lot has changed in the team since then. He credits this season’s success to a renewed team culture and positive approach to the game, which gave much confidence to the players throughout the season.

“We’ve built a very strong relationship between players, coaches, staff and everyone around the team,” he explained.

“I think that’s what makes us a pretty strong team at the moment, not changing our level and our style of volleyball, no matter who we play against. The connection between everyone is really strong and everyone believes in the system.

“Of course it makes it easier to believe in a system when you’re winning,” Perry said.

With his club still making a run at the national title, Perry will have a few more weeks of European volleyball before he can focus entirely on the Volleyroos, who will play in the preliminary round of the 2022 FIVB Volleyball Men’s Nations League between June 7 and July 10. 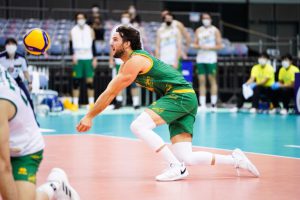 At 26 years of age the Volleyroos’ libero is still young, but with almost 10 years of national team experience under his belt, he’s already become one of those players younger squad members go to for mentorship and advice. That’s a role he gladly accepts, and one that naturally comes with the leadership and drive required to excel in his playing position.

“I think that as a libero, you have to be a leader,” Perry said.

“You can’t just sit back and wait for things to happen. There’s a lot of things that probably go unnoticed for the role, in terms of organisation and attention to details, but knowing your teammates and how they react to certain things, or even how to give them confidence is really important.

“I joined the national team when I was 17 and I was the youngest player until 2018, I think. Only in the last couple of years have we introduced a lot of new young players, so in terms of mentoring you have experiences and stories to share – you can help them and guide them into that team they earned a spot in.”

With a new coach, a few veteran players now retired and plenty of youth in the ranks, the Volleyroos are in a rebuilding stage. Perry hopes the young and up-coming talents who will join him at the Nations League will also come together in chasing the dream of playing at the Olympics.

“That has always been a dream of mine. But it’s always very exciting representing your country, no matter the occasion.

“I think as a group, and with the new coach, we’ll have to reassess our situation and see what happens. But it’s definitely an exciting time for the Australian team,” he said.