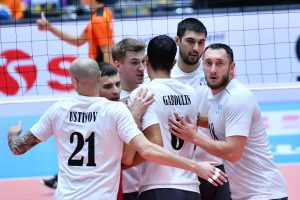 Suffering a bitter 2-3 loss to Al-Arabi Sports Club from Qatar in the do-or-die semifinals the previous day, Burevestnik Almaty came up with their splendid form in this crucial match against Nakhon Ratchasima, hoping to revive their fortunes in a consolation match against the team they had already beaten 3-0 in the preliminary Pool A clash earlier. 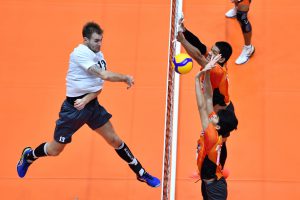 The hosts made all their efforts to win this match to take revenge of their previous loss, but Burevestnik Almaty remained offensively strong with the likes of the 196cm-tall powerful hitter Sergey Rezanov and veteran Vitaliy Vorivodin, while the Thai side were strengthened by Thanat Bamrungpakdee, hard-attacking Wanchai Tabwises and left-hander Amorntep Konhan. 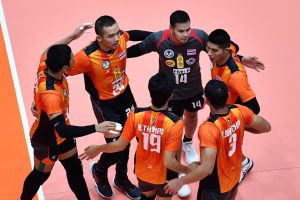 Both sides got off to a thrilling start to fight for a pace-setter. Thanat and Wanchai produced solid blocks to help Nakhon Ratchasima take the lead up to 17-15, but after that the Kazakhs roared back with attack hits and powerful jump serves to win the hard-fought set 25-23. 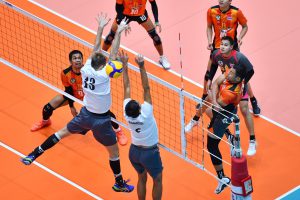 The second set turned out to be one-way traffic as Mikhail Ustinov displayed his good skill in penetrating the Thai defence with his spectacular attacks for the team’s commanding 22-12 lead. After that, the strong visitors made short work of the smaller-built rivals to win the lopsided battle 25-17. Nakhon Ratchasima still played cool under pressure in the third set, but the confident Kazakhs played with more consistency to take a narrow 21-18 lead before stretching it to 24-19, courtesy of their exceptional tactics including terrific jump serves and thundering cross-court attacks from Sergey and efficient blocks by Vladimir Prokofyev and Vorivodin. Burevestnik Almaty clinched the set 25-21, match and bronze medal. 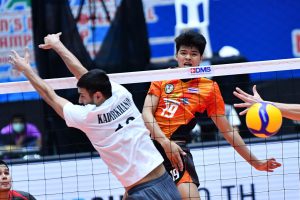 Sergey Rezanov led Burevestnik Almaty with 17 points including 10 kills and team-leading 5 blocks, while Wanchai Tabwises was the only Thai player who scored double digits with 11 points for Nakhon Ratchasima, all from the attacks. 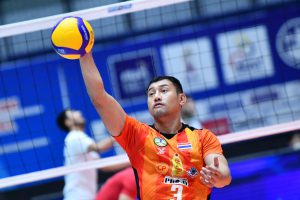