The Spanish coach will lead Korea until Paris 2024

The Korean Volleyball Association announced on Thursday the appointment of Cesar Hernandez Gonzalez as the new head coach of the women’s national team for a three-year term from 2022 to 2024. 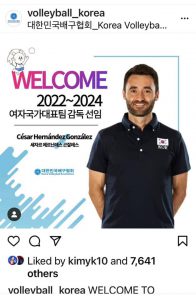 He first worked on the sidelines of the Korean team as an assistant under Italian head coach Stefano Lavarini from 2019 to 2021 and will be returning next year to take over as head coach for the Olympic Games in Paris. 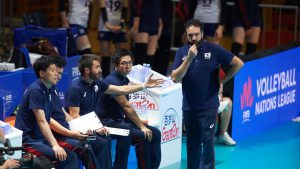 Born on October 24, 1977 in Madrid, Spain, Gonzalez combines his specialisations as trainer and scoutman in his work as coach. He began his coaching career in 2001 as coach of women’s teams in Madrid.

He worked as an assistant coach for the Spanish women’s national team after coaching in Pozuelo, Alcobendas, Las Rozas and Madrid.

In 2014, he worked at Lokomotiv Baku and then went to France and Italy to work for clubs ESCR Volleyball Le Cannet and Savino Del Bene Scandicci, respectively.