NEWS FROM THE CEV

Luxembourg, February 24, 2020. The home of European Volleyball in Luxembourg City played host on Sunday to the kick-off meeting of the truly historic EU-funded project bringing together the CEV and the Asian Volleyball Confederation (AVC) with a focus on Volleyball coaching. The discussions were extremely productive and helped lay the groundwork for what is to follow in the coming weeks and months.

Three members of the European Coaches Commission, Thomas Bro-Rasmussen, Gert Van de Broek and Sofia Papadopoulou represented the European side, together with CEV Development Manager Vuk Karanovic and another two coaches, Gasper Ribic of Slovenia and Istvan Szabados from Hungary.

The attendees agreed that the project should address the coaches working with underage categories with a focus on upscaling their Volleyball knowledge but at the same time, their leadership skills as well. The work will focus primarily on two categories, more specifically high-potential coaches and coaches’ developers.

The next meeting should be taking place in September (date TBC) in Bangkok, Thailand. The project’s consortium will define the format of the Coaches Convention, which will represent the pinnacle of the project in 2021. 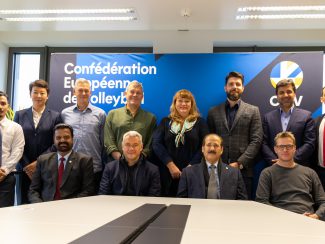