Qataris and Norwegians to play for the gold medal in Mexico

Back on the FIVB Beach Volleyball World Tour for the first time since September 2019, Norwegians Anders Mol and Christian Sorum are set to meet Qataris Cherif Samba and Ahmed Tijan in the gold medal match of the first 4-star event in the Cancun Hub on Tuesday.

The top-ranked team in the FIVB World Ranking, Mol and Sorum trailed for the first time in the tournament during Monday’s semifinals, but recovered from a first-set upset to come back and defeat Czechs Ondrej Perusic and David Schweiner, the winners of the 4-star Katara Cup in Doha last month, 2-1 (17-21, 21-14, 15-9) to secure their spot in the final.

“It’s always challenging to rally from behind and the Czechs are such a great team and are on a roll after they won in Doha,” Mol reflected. “They play at a great level and we always struggle against them, but I’m really happy that we fought until the end. Christian and I hate losing more than anything and I think that’s what makes us one of the most difficult teams to play against. To be in the final in our first tournament in the season after a year in which we had some struggles and didn’t get to practice as much as we wanted is amazing, I can’t believe it. We missed playing beach volleyball and it’s great to be back.” 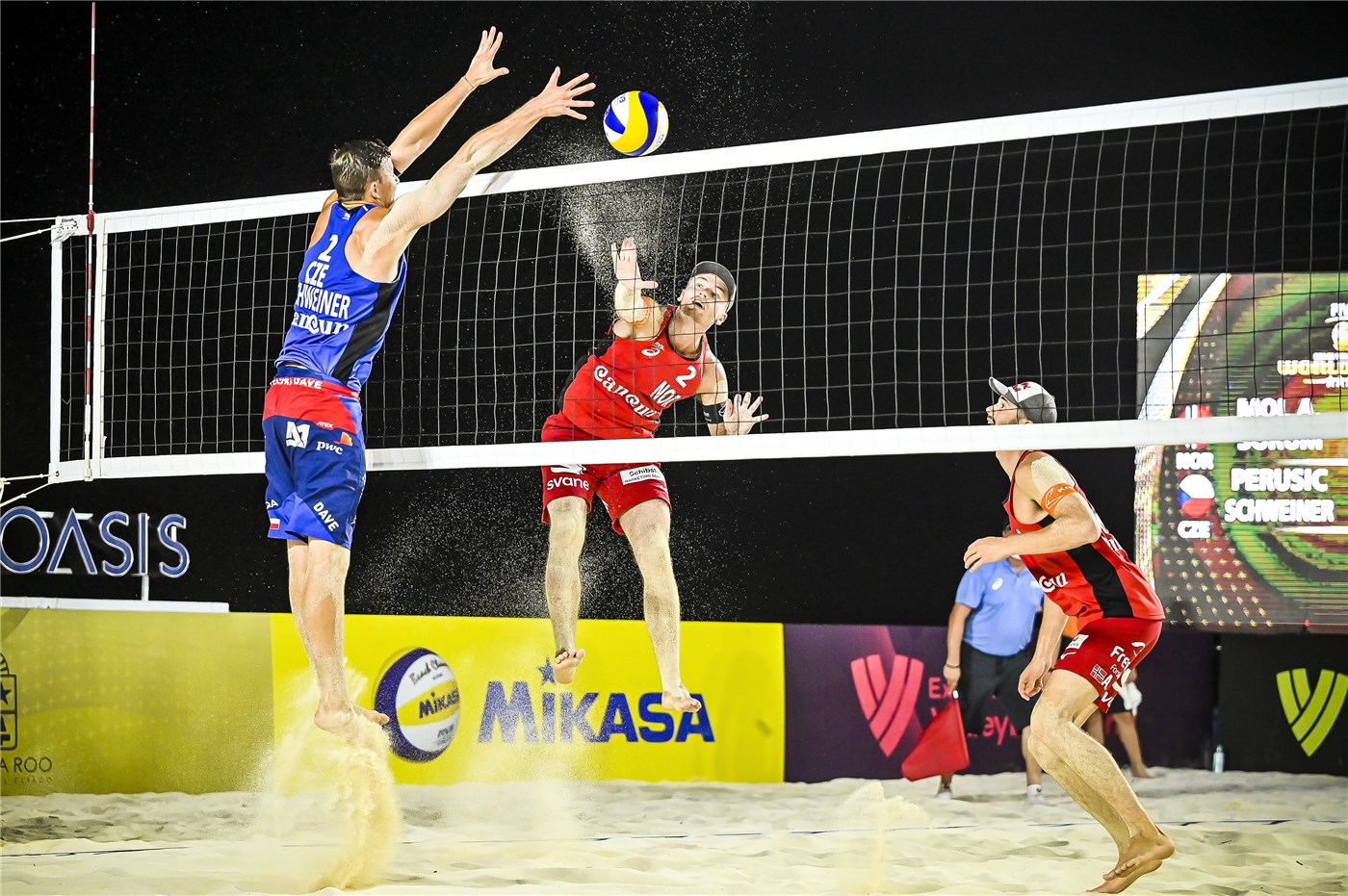 Sorum hits against the Czech block during the semifinals

The Beach Volley Vikings will be playing for their 11th World Tour title as a team, all titles previously won between 2018 and 2021. The 23-year-old Mol and the 25-year-old Sorum have lost in only two of the 12 gold medal matches they have played so far in their careers.

Cherif, a 25-year-old Rio 2016 Olympian, and the 25-year-old Ahmed, who arrived in Cancun fresh from a fourth-place finish at last month’s 4-star Katara Cup, have won five matches in a row after losing their tournament-opener against Russians Konstantin Semenov and Ilya Leshukov.

The Qataris, who eliminated reigning world champions Oleg Stoyanovskiy and Viacheslav Krasilnikov of Russia in the Round of 16, advanced to the gold medal match after a 2-0 (21-17, 21-18) semifinal win over Austrian qualifiers Martin Ermacora and Moritz Pristauz.

“Sometimes you need to hit a wall to wake up and that’s happened with us here,” said Cherif, who will play in the final of a 4-star World Tour event with Ahmed for the first time. “We didn’t play well in our first match, but managed to keep progressing and here we are. But the job is not over yet. The conditions here are very unique with the wind and we’ve been talking and finding solutions. Matches against Norway are always fun, they’re one of the best teams in the world right now and we’re looking forward to playing against them.”

Currently ranked 13th in the world, the Asians are one of the few teams on the planet to hold a positive record against the Norwegians, having won two of their three matches with the Europeans, all of them in 2018.

The medal matches of the first event in Cancun continue to be streamed live on the Beach Volleyball World Youtube channel https://www.volleyball.world/en/story/cherifahmed-to-challenge-molsorum-in-cancun-final?id=92550. Subscribe, log in and set reminders to receive notifications when streams begin.