Nakhon Pathom, Thailand, August 11, 2022 – China , fresh from beating Chinese Taipei and Bahrain, moved a step closer to booking their semifinal berth in the 2022 AVC Cup for Men to see off Pakistan in thrilling straight sets 25-22, 25-17, 25-18 in their round of last eight teams in Pool F at the Nakhon Pathom Provincial Gymnasium here on Thursday. 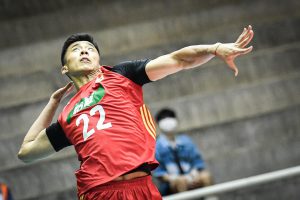 Against Pakistan, which had suffered their first loss at the hands of Iran, the mighty China, current world No.19 which finished 13th place at this year’s VNL, fielded a formidable lineup led by star spiker Zhang Jingjin, veteran Dai Qingyao and experienced setter Yu Yaochen. The Chinese side led narrowly 13-12, thanks to their solid blocks and Zhang Jingjin’s mighty attacks. China head coach Wu Sheng requested a timeout to improve his team’s defence when Pakistan came back to trail closely 17-20. His intention worked out pretty well despite the fact that it was a thrilling home stretch when both teams traded attacks in an effort of winning this set. Leading with a four-point advantage at 24-20, China allowed the determined rivals two more points before Dai Qingyao smashed a cross-court attack to win the close set 25-22. China still dominated the second set with Zhang Jingjin on fire and the 207cm-tall Zhang and Peng Shikun, 208cm, combining well for solid blocks, allowing Pakistan scoring difficulty. China led 16-11 before Mazhar Ali brought Pakistan back with his aggressive attacks to reduce the gap to 16-22, but the Pakistan’s gallant fight did not last long. China continued their onslaughts to take the comfortable set 25-17. In the third set, Pakistan battled hard, trailing by 8 points at 9-17. Confident of winning this match in straight sets, China head coach Wu Sheng replaced hist best players with substitutions including Wang Bin and setter Liu Meng to stretch the lead to 19-11. After that, the Chinese found their touch, surging into a commanding 23-17 lead before Zhang Jingjin nailed a crucial spike to give the team the set point. Pakistan saved one when a serve from Zhang Zhejia went wide, but their delight was short-lived. China did not allow the rivals any chance to score more as they won the last point to end the Pakistan’s challenge 25-18. Zhang Jingjin chipped in with 15 points including 12 attacks and 3 blocks, while Mazhar Ali led Pakistan with 10 points. “China are one of the strong teams. Most of my players are juniors and I think we still need to improve more on reception and defence. We next take on Iran, who had already lost to Bahrain. I am upbeat that if we can improve our reception and defence, we can beat them,” Pakistan head coach Saeed Ahmed Khan Sady commented. 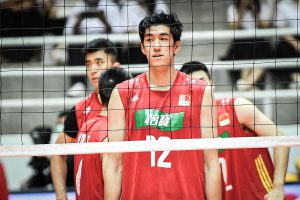