Beijing, China, July 23, 2020 – After a seven-month break due to the Covid19 outbreak, the 2019-2020 China Men’s Volleyball Super League will resume behind closed doors on August 20 at Qinhuangdao Training Base in Hebei Province according to the official announcement by China Volleyball Association on Wednesday.

In order to fully support the national team in their preparation for the 2020 AVC Men’s Tokyo Volleyball Qualification between January 7 and 12 in Jiangmen, China, the 2019-2020 China Men’s Volleyball Super League made concessions and had its first-round 6 matches played until January 19 this year. However, due to a widespread outbreak of the novel coronavirus thereafter, the league had to be suspended together with other sport competitions following the lockdown restrictions imposed by the General Administration of Sport of China aimed at the reduction of infection rates.

Through the heroic efforts against the pandemic, the Covid19 situation within China has been improving in leaps and bounds. The China’s government has decided to ease the lockdown restrictions and the General Administration of Sport of China also released a document on July 6 concerning the reopening of sport competitions under some criteria.

Regarding the criteria, a detailed Covid19 prevention handbook for the resumption of 2019-2020 China Men’s Volleyball Super League has been laid down and some measures, like full coverage of nucleic acid testing, sealed management, no spectators, etc, will be adopted to ensure the safe and smooth running of the league.

Another important item is, no foreign aids are allowed to participate in the resuming league, which may affect some teams.

“It is good news and a positive signal to resume the league, which will take place from August 20 to September 2. The China Men’s Volleyball Super League is the best platform for all participating teams to test their training level and preparation. No foreign aids may have some affects on the level of the league, but we can accept it under such a circumstance. Since the National Games will be held next year, the league will be a good opportunity for each team to test their own players in what could be a rehearsal before the National Games,” said Lu Weizhong, head coach of Jiangsu Nanjing Radio & TV New Media, which claimed the third place in the last season.

In the previous season, Shanghai Golden Age successfully defended their League title for consecutive 5 seasons after a scintillating 3-0 win against Beijing Auto at the best-of-five-match in the China Men’s Super Volleyball League Finals. It was also the 15th China Volleyball League title in the team history of Shanghai. 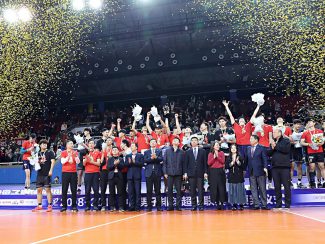