China surged to the top of the world ranking when they captured gold medal at the Rio Olympic Games in 2016, but slipped to the world No.2 when old foes Serbia captured the world title in Japan last year to overtake the formidable Asian counterparts in the global rankings. The European giants suffered a bitter 1-3 loss to the Chinese side in the thrilling final showdown of the quadrennial sporting extravaganza in Brazil. En route to their world No.1 status, China swept all eleven of their matches in Yokohama, Sapporo and Osaka to retain their crown in the round-robin FIVB Volleyball Women’s World Cup.

Brazil and Russia maintained their respective 4th and 5th places. The Netherlands moved up in the ranking to come in 6th, while Japan dropped to 7th in world rankings. Italy, Korea, Dominican Republic, Argentina, Turkey, Puerto Rico, Thailand, Germany, Bulgaria, Cameroon, Canada and Belgium remained at their previous world rankings from 8th to 19th respectively. Kenya, which finished a distant 11th at the FIVB World Cup, moved up one position from 20th to joint 19th.

Some other Asian teams saw Kazakhstan and Australian maintain their 23rd and 30th places in world rankings, while Chinese Taipei and DPR Korea rose to joint 32nd. Vietnam also moved to 36th, with Iran and Fiji Islands staying at joint 39th and Maldives and Nepal joint 66th. 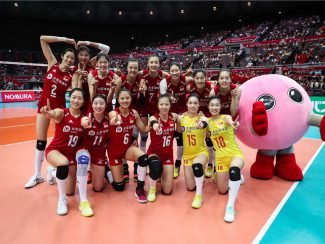