Returning to the Volleyball Nations League for the first time since 2019, China had to wait until the last day of the opening week of the men’s tournament to secure their first victory, but when they got it, they did it in memorable fashion.

Unbothered by the thousands of Brazilian fans who were at the Nilson Nelson Arena in the country’s capital Brasilia, the Asians upset defending champions Brazil and produced a straight-set 3-0 (25-23, 31-29, 25-23) victory to silence the home crowd.

After losses to Iran, Japan and Slovenia in their previous matches, the Chinese found their best game against the South Americans and were better in the deciding moments of the match to claim their first VNL victory in over three years. It was also their first-ever triumph against Brazil in an FIVB-sanctioned tournament.

The result knocked Brazil out of the top spot in the World Ranking for the first time in more than 20 years, moving Poland to first place, and pushing the Asians up five spots, climbing to 17th place.

“This is a big victory for our team, it’s very encouraging” outside hitter Yuan Dangyi said after the match. “We entered the match determined to do our best but we knew Brazil were the number one team in the world and a very strong opponent. I think today we played better and that’s why we won. Each of us was focused on our own roles and that was very important. We’d love to play Brazil again because they’re so strong.”

Another outside hitter, 22-year-old Zhang Jingyin was a key player in the Chinese victory. The 2.07m-tall spiker was a scoring force for the Asians, leaving the court with a match-high 25 points, producing 22 kills, two aces and one block.

Zhang scored the first point of the match by hitting over the top of the Brazilian block and never slowed down. The outside hitter came up big at the end of the opening set, scoring three of the last four Chinese points with two backcourt spikes and a kill at the net that ended the set.

The outside hitter remained productive for his team throughout the second set and was pivotal to the Chinese victory. He scored from the backcourt to tie the score at 24-24 and deny a Brazilian set point. Later, it was one of his two aces in the match that secured his team the 31-29 set victory.

Zhang once again delivered in the third set. It was one of his kills that tied the set 22-22 after the Brazilians had a 22-19 lead. A spike from Zhang on the right side also gave his team a 24-23 lead, which was followed by the game-winning point in the next play. 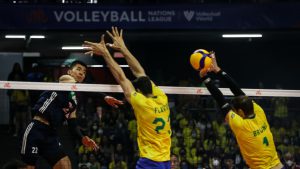 Zhang spikes past the Brazilian block

The next most productive Chinese player in the match was opposite Zhang Guanhua, with nine points, all in kills.