Nakhon Pathom, Thailand, August 12, 2022 – China overcame a sturdy challenge from Iran to rally past the tough rivals in hard-fought four-set thriller in their last match in the round of the last eight teams in Pool F in the 2022 AVC Cup for Men at the Nakhon Pathom Provincial Gymnasium here on Friday. The dramatic 25-19, 25-22, 21-25, 25-16 victory not only put China on the top of Pool F, but also handed them semifinal berth. Joining them in the semifinals are Bahrain, with the Iranians relegated to classification round for 5th-8th places. 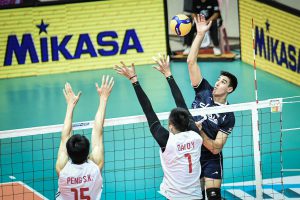 World No.19 and 13th place at this year’s VNL, China remained strong tactically and technically with the likes of powerful Zhang Jingyin, veteran Dai Qingyao and Peng Shikun, while the Iran U20 team, preparing for the forthcoming Asian Men’s U20 Championship in Bahrain, fielded some good players in the 206cm-tall Amir Mohammad Golzadeh and Poriya Hooseinkhanzadeh Firouzjah. China made a solid start to surge into an early 4-1 lead and were working as well-oiled machine to stretch it to 15-12, thanks to spectacular spikes from Zhang Jingyin and Dai Qingyao. Iran fought back hard, with Amir Mohammad Golzadeh entertaining a large number of fans inside the competition site with his exceptional attacks and dazzling ace serves to reduce the gap 17-19. However, China proved a tough nut to crack to continue notching crucial points from Dai’s fierce attacks and impeccable defence from Zhang Zhejia and Peng Shikun. China took the first set 25-19. 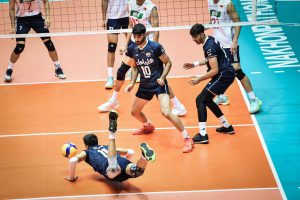 It turned out to be the similar script in the second set. China gained the upper hand initially to lead 12-8 before Iran hit back to narrow the margin 20-21, courtesy of their heightened defence and incredible power at the net led by Amir Mohammad Golzadeh. Dai Qingyao fired furious attacks to move China ahead 23-21, but Iran were just never-say-die. Amir Mohammad Golzadeh hammered an off-the-block attack to help Iran reduce the gap 22-23. Still, China cruised on to win the hard-fought set 25-22. 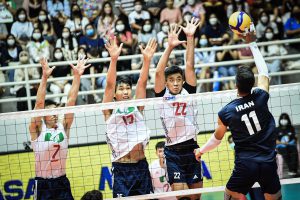 Conceding two straight sets, Iran performed exceptionally In the third set. Trailing 11-13, Iran fought back in style with Ali Mohammad Golzadeh, Poriya Hooseinkhanzadeh and Yousef Kazemi Poshtpari getting the team back into game. Golzadeh, who stands 206cm tall, overpowered the Chinese solid blocks with his exceptional attacks and powerful jump serves to help Iran catch up with China at 17-17 and stormed on with that splendid form. 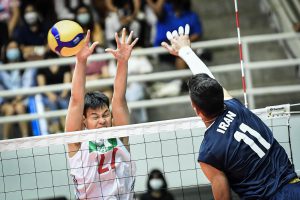 Golzadeh pounded on great attacks to put Iran in commanding 23-20 and the team never looked back after that to clinich the set 25-21 and reduce the margin 1-2. 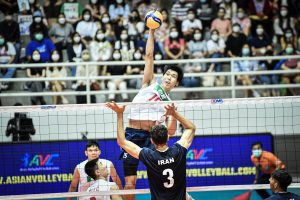 In the fourth set, China relied on their incredible power at the net. Zhang Jingyin and Dao Qingyao uncorked a series of thundering attacks and Zhang Zhejia and Zhang Jingyin came up with effective blocks to take a six-point clear at 14-8 and advanced 21-14. Iran regrouped and hit back gallantly, but their determination was in vain as China intensified their defence and foiled most of the Iranian attempts. China captured the comfortable set 25-16, match and a semifinal berth. 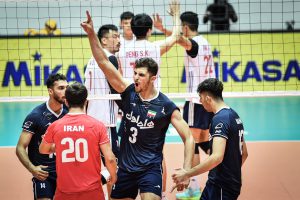 At the completion of the round-robin Pool F, unbeaten China topped the pool with 9 points from three straight wins, followed by Bahrain with 6 points from two wins against one loss. Iran came in third position with 3 points from one win against two losses and winless Pakistan finished fourth. 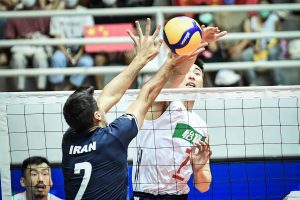 China and Bahrain booked their semifinal berths, while Iran and Pakistan had been relegated to classification round for 5th-8th places.