Glinka led Poland to the two European Champions titles in 2003 and 2005. At 21, she left Poland to play abroad, and worked under Lang Ping at Italian side Asystel Novara.

“When I signed a contract with Novara, I thought I was a great player. Lang Ping was already a great master. She won a lot of medals and she stood on top of the podium at the Olympic Games in Los Angeles. I will never forget the first training session with her. I was late and then Lang Ping made an individual training schedule for me. It was so intense that I couldn’t stand on my feet after that,” Glinka was quoted as saying by Polish outlet Onet Sport.

“I was the European champion and I was so confident but Lang Ping changed my attitude. She came to the dressing room and she said that no matter what I won in the past, I should just focus on the future. She helped me,” added the former Vicenza Volley player.
Considered by many as Poland’s best ever female volleyball player, Glinka played under Lang in 2003 and 2004. 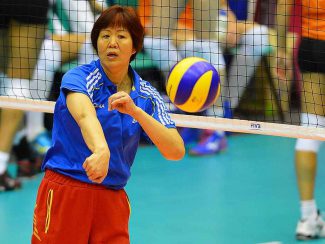