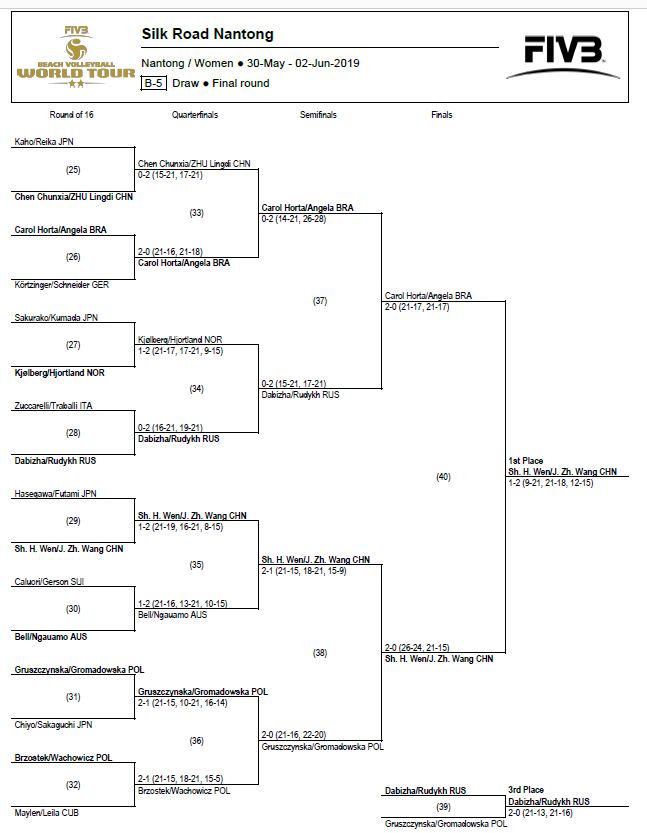 Seeded 23rd in the main draw in the third annual event, Wang and Wen posted a 2-1 (21-9, 18-21, 15-12) win in 48 minutes over Horta and Angela. The Brazilians were seeking the South American country’s second straight gold medal in the Silk Road Nantong Open after Josemari Alves and Liliane Maestrini captured the 2018 title.

Wang and Wen, who have posted an 11-2 match mark together in three FIVB events, rebounded from an opening pool play setback Friday to second-seeded Phoebe Bell/Jessyka Ngauamo of Australia to win their next five matches to share the $4,000 first-place prize. One of the wins was a quarterfinal victory over Bell and Ngauamo.

Horta and Angela, who also dropped a group match to Cubans Mailen Deliz/Leila Martinez Friday, split $3,000 for finishing second in their fifth FIVB World Tour event together. The Nantong placement was Horta and Angela’s best FIVB finish together as the pair posted a ninth last October in Qinzhou, China.

The match was the 26th women’s FIVB World Tour gold medal meeting between the two countries as Brazil now holds an 18-8 record in international beach volleyball finales with China.

To reach the finals, Wang and Wen posted a 2-0 (26-24, 21-15) semifinal win in 41 minutes over 22nd-seeded qualifier Aleksandra Gromadowska/Jagoda Gruszczynska of Poland after Horta and Angela advanced to the gold medal match with a 2-0 (21-17, 21-17) victory in 37 minutes over fifth-seeded Ksenia Dabizha/Daria Rudykh of Russia.

In the bronze medal match, Dabizha and Rudykh defeated Gromadowska and Gruszczynska 2-0 (21-13, 21-16) in 33 minutes to share the $2,000 third-place prize. The Polish pair split $1,200 for placing fourth. It was the Dabizha and Rudykh’s second World Tour medal after winning the Tuan Chau Island title May 12 in Vietnam.

The Silk Road Nantong Open was the first of two back-to-back women’s international beach volleyball events in China as the city located on the northern bank of the Yangtze River stages the sixth of nine FIVB World Tour stops in the Asian country during the 2018-2019 season. The Silk Road Beach Volleyball events continued next weekend in Nanjing for another women’s-only FIVB World tour event.

China has previously hosted FIVB World Tour events last September and October in Zhongwei, Qinzhou and Yangzhou before staging tournaments during the 2019 portion of the international calendar in April and May with tournaments in Xiamen and Jinjiang. 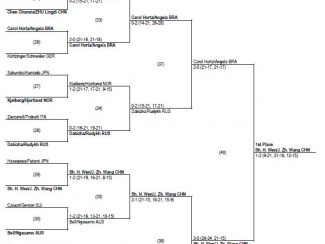 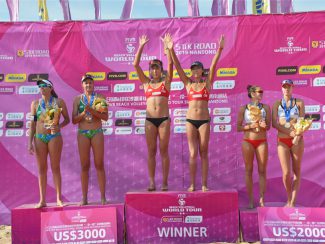