CLANCY AND ARTACHO ON ROAD TO RECOVERY IN DOHA

After a frustrating finish in Rosarito, the Olympic medallists will try to make it to the semifinals on Saturday in Qatar

The Volleyball World Beach Pro Tour’s inaugural season didn’t start the way Taliqua Clancy and Mariafe Artacho expected as the Australians had to settle for ninth place at the Rosarito Elite16 event, in March, after they won just one of their three matches in Mexico.

The Tokyo Olympic silver medallists returned home, worked hard for six weeks and headed to Qatar wanting to get a better result. They will be in a position to accomplish that on Saturday, when the Doha Challenge tournament enters its elimination round at the Al Gharafa Beach Courts.

· All the matches in Doha are available to watch live or on demand on Volleyball TV.

The Australians will enter the decisive stage of the event in Doha in great form after they were one of the six teams that won their groups on Friday and did so impressively, coming out on top in both of their Pool D matches in straight sets.

Clancy and Artacho had a dominant performance against Zoe Verge-Depre and Esmee Bobner, taking the young Swiss pair down 21-12, 21-16. They were pushed by 2021 World Tour Finals winners Karla Borger and Julia Sude of Germany, but pulled off a 21-14, 22-20 victory to remain on course for a good finish in Doha. 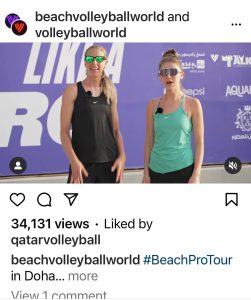 With their two pool victories on Friday, the Australians are guaranteed a place in the Round of 16, where they will face Finland’s Taru Lahti and Niina Ahtiainen, and will at least match their Rosarito finish this week. They could end the Saturday in the semifinals and be in a position to fight for their first Beach Pro Tour medal.

Fellow Olympic medallists Joana Heidrich and Anouk Verge-Depre of Switzerland also had a clean first day in Doha, winning their first two matches to top Pool C. The Europeans, who took bronze last year in Tokyo, started their campaign with a three-set (17-21, 21-16, 15-11) victory over Canadians Alina Dormann and Amanda Harnett and followed that up with another triumph against a team from Canada, this one a sweep (21-18, 21-19) in their encounter with the NcNamara twins Megan and Nicole. 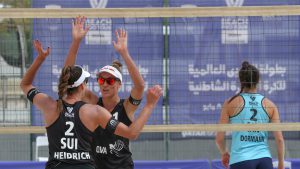 Also winning their pools and advancing directly to the Round of 16 in Doha on Friday were the Netherlands’ Katja Stam/Raisa Schoon, Brazil’s Barbara Seixas/Carol Salgado, Germany’s Sandra Ittlinger/Isabel Schneider and Cinja Tillmann/Svenja Muller.

The second best teams in each pool are also guaranteed a place in the Round of 16, as are two best third-placed duos. The final two spots will be determined at the start of the day on Saturday, with two matches reuniting the four remaining third-placed tandems.

The event in Doha is the third Challenge tournament of the Beach Pro Tour inaugural season. The Challenge events represent one of the three levels of the Beach Pro Tour. They are ranked between the Elite16, which feature the highest level of the sport, and the Futures, which offer young, up-and-coming players access to international beach volleyball, and feed into the elite of the sport.