WOMEN’S VOLLEYROOS BACK TOGETHER WITH ASIAN CUP IN THEIR SIGHTS

The Australian Women’s Volleyroos were recently reunited at a four-day trial camp at the Australian Institute of Sport in Canberra last week.

It had been over a year since the last time the Volleyroos were able to train as a group, with squad veterans and upcoming talents excited to redevelop team chemistry as they get to know one another on and off the court.

“It’s been a lot of names, people, where they are from and what they have done. Getting to know each other is the biggest and most important component right now,” said 26-year-old Volleyroos setter Kelly Lean.

“We’ve had a lot of time apart over the last few years, so to come together and get the ball rolling means a lot to us,” echoed Lean’s teammate Tara Maland. 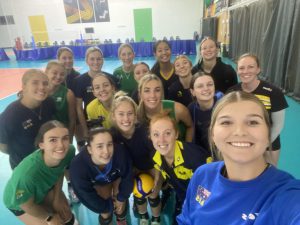 The 22-year-old libero is one of several Australian squad members playing professionally in Europe, where she finished ninth in the Swedish League with her club Gislaved VBK.

As much as having part of the squad spread across Europe gives some of the Volleyroos the opportunity to compete against each other, transitioning between international clubs and the Australian team environment is not always easy. Still, Matland said there are a lot of benefits to having players take on the challenge of playing in international club teams.

“It gives us the opportunity to learn, adapt and grow as players in a whole other capacity,” she explained.

“Coming together again after the pro season and getting everyone on the same page definitely takes time, but the determination of this group makes that transition rather fast and seamless.” 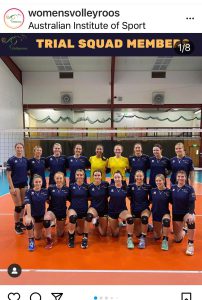 With another training camp already scheduled for a few weeks’ time, the Volleyroos are working hard to get ready for their first tour overseas in two years. After that, additional camps will allow the coaches to confirm selection for the AVC Cup for Women, known as the Asian Cup, which will be held in the Philippines between August 30th and September 6th. The Volleyroos will be playing in pool B, facing Iran and Thailand.

“[Until then] the team will look a little different each time, but it’s really important for us to start strong here and make it tough for coaches to make selection choices,” Lean said.

“It is really exciting to see a new group of talented, developing and passionate women put so much heart and hard work into this first camp,” Maland added.

“It has demonstrated to everyone already that we have the capacity to really grow this group as a unit, to take on big challenges and achieve great success.

“Now we’ve got our goals set, both long and short term, to maximise our potential across the next six months and beyond!”