Nakhon Pathom, Thailand, June 5, 2022 – Shortly after the preliminary inquiry, coaches of teams participating in the 14th Asian Women’s U18 Volleyball Championship at the Nakhon Pathom Sports Centre Gymnasium between June 6 and 13, 2022, stopped by for short interview requests.

“I have been coaching for 15 years and I hope the experience can help my players to be among top four teams and get our goal here. My team is fully ready and we do not have any problem,” Ye Wen, China’s head coach, said.

“We are here to do our best to gain experience and to get the ticket for the World Championship. The new regulation of AVC to change U17 to U18 helped us to use stronger players and I am satisfied with it,” Korea’s head coach Chang Yoon Hee, commented.

“I have been with the underage for seven years and my best records with this age group took place in the 2017 FIVB Volleyball Girls’ U18 World Championship in Argentina where we finished 17. We are ready to do our best and get the best possible result,” Apirath, head coach of Thailand, said.

“Today we played a friendly match against Thailand and set by set, we are getting better but I saw that my players lost to the opponents before entering the court as they are affected by the names. If I can fix their mentality, they are technically ready. My players are all U17 and the new regulation of AVC could not help us as there were not enough time to add some new players and boost our power,” Mitra Shabanian, head coach of Iran, said.

“I was with the youth team in 2013 last time. We had hard times practicing due to the COVID-19 pandemic and we could not train properly. Our training stints had been stopped at some points. Most of our players are all U17 as we had no time to prepare our U18 players,” Jerry Yee, head coach of Philippines, said.

“This is my first experience and it is a nice chance to be with this age group. Before coming to Thailand, my captain get injured and I had to replace her with a new one. The other players are fit and ready to play. The new rule of AVC is so good as it was a right decision to alight men with the women but it should be much better than this if we would have known it last year to get the chance to add new players,” David Beard, head coach of Australia, said.

“The good decision of AVC to equalize the age group with the men is very good and we could add more players. One year older means a lot as we can empower the team with more potential players. We are ready in full measure to play well and to secure a place for the World Championship”, Viral Shah, head coach of India, said.

A total of eleven teams arrived in host city Nakhon Pathom and are well-prepared for the championship. The eight-day event will burst into thrilling actions on June 6. Teams will test their mettle in the pool round-ronin preliminaries based upon Berger categorization within two pools: 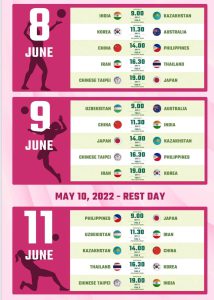 YOUNG REFEREES EXPECTED TO DO THEIR DUTY WELL AT 14TH ASIAN WOMEN’S U18 CHAMPIONSHIPTHREE THAI PAIRINGS THROUGH TO WOMEN’S SEMIFINALS, AS THAILAND, IRAN SET UP MEN’S SHOWDOWN IN 4TH ASIAN U19 BEACH VOLLEYBALL CHAMPIONSHIPS