Toray Arrows and Suntory Sunbirds ran away with two victories over the weekend in the men’s tournament, while JT Marvelous, NEC Red Rockets, Toray Arrows, Denso Airybees and Saitama Ageo Medics posted double triumphs in the women’s tournament of the Japan V.League. 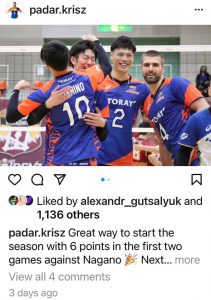 With national team middles Kentaro Takahashi and Haku Lee manning the net, and setter Naonobu Fujii setting the plays for the heavy-hitting Krisztian Padar, Toray Arrows were able to gain an edge and neutralise VC Nagano and their top-scoring Indonesian opposite Rivan Nurmulki to claim the top spot in the men’s ranking. 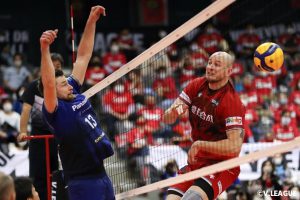 Also splitting victories over the weekend were JT Thunders and JTEKT Stings, and Sakai Blazers and Oita Miyoshi Weisse Adler.

JT Thunders won in four sets, but the Stings fought back in their second match to win in five sets. Oita Miyoshi won a four-setter before going down in straight sets to the Blazers.

In the women’s tournament, defending champions JT Marvelous picked up where they left off last season, shutting out Toyota Auto Body Queenseis to start the new season with a 2-0 record. Annie Drews’ national teammate Kelsey Robinson did not see action in either match. 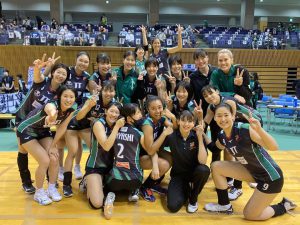 Sarina Koga led her team both in offence and defence to help the NEC Red Rockets to earn full points off 3-0 and 3-1 victories over Kurobe Aqua Fairies this weekend. Koga has clearly enhanced her leadership qualities since becoming Japan’s scoring leader at the 2021 FIVB Volleyball Nations League and Tokyo 2020 Olympic Games. 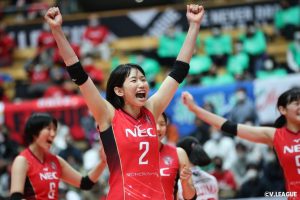 Mayu Ishikawa and Jana Kulan’s teamwork helped Toray Arrows win two matches in a row against Victorina Himeji, who had Dutch star Celeste Plak debuting in the V.League. Toray Arrows started with 3-1 win, then progressed to the next match with a 3-0 stunner.

Denso Airybees also earned full points after their four-set and straight-set victories over PFU Bluecats, while Ageo Medics won both their matches, but did not gain three points in the first match as their first match with Okayama Seagulls went to five sets before they closed the next match with a straight-set triumph.

Hitachi Rivale split victories with Hisamitsu Springs, with the former winning in a tight five-set battle, and then the latter responding with a four-set win.