The tournament’s leading scorer, Malwina Smarzek, also tallied 23 points, but had less support from her teammates to post an upset against the defending champions. The North American side showed better firepower as three other players scored in double figures, including Kelsey Robinson who recorded 19 points.

The match started with a tight contest until Poland managed a break away in the opening set. USA responded with commanding wins in the next two sets. In the fourth set, USA coach Karch Kiraly gave full confidence to his starting six to contain the threat by Poland and secured the victory with a two-point edge.

Gozde Yilmaz started for Turkey in the first three sets then came off the bench in the fourth frame, collecting 18 markers to lead her team in scoring. Ebrar Karakurt added 16 points and Kubra Caliskan had 14 points, including five blocks.

Liu Yanhan powered China’s offence with 21 points, but the visiting side outscored her team in attacks, blocks and aces.

Turkey had a steady start to take the first two sets. They also led in the third frame, but China launched a fight back against them to extend the match. Even with a slim lead against the hosts in the fourth set, the European side made sure this time that they safely reach the end for the win.

The two winning teams on opening day – USA and Turkey – met in last year’s VNL final. With their victories, they are in good position to set up another rematch at the final. 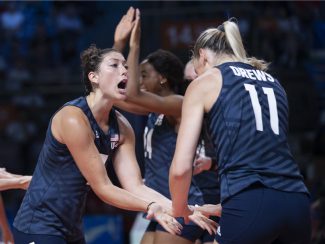