Rondina felt cramps creeping from her right leg toward her thigh in the entire match and Eslapor needed a five-minute medical timeout in the second set to suppress cramps that rose from her thighs to her abdomen.

But both sides hung tough with Espalor coming off the medical timeout with four consecutive service aces to push her PHL Blue team closer to Rondina’s Blue squad, 10-12, in the decider.

But Rondina, who was  often seen pulling the toes of her right foot upwards to avoid cramps, endured and nailed the match’s last three points for the title.

“We were tired … after having gone through the competition, the pressure and the strong opposition,” said Rondina, the most decorated among the four finalists after he final that drew a jampacked crowd at the Subic Bay Sand Court.

“I could hardly jump, even during our pre-final training,” said the back-to-back Southeast Asian Games bronze medalist with Bernadeth Pons, who is under rehab for a shoulder injury.

Relief was written all over Rondina and Gonzaga, who, like their final victims, were in a hurry to head home later Sunday.

All four had flights booked—Rondina to Cebu, Rodriguez to Negros Occidental and Espolar to Cagayan de Oro—for Sunday night at Manila’s airport in anticipation of an early exit from the tournament organized by the Philippine National Volleyball Federation (PNVF).

“Honestly, we never expected this one, all of us,” said Gonzaga, who’s returning to Manila to attend to personal matters—especially her obligations at the Philippine Army—also on Sunday night.

A big crowd came to see the final but which team they rooted for was hardly audible. They appreciated both sides who regaled their fans with exciting exchanges and daredevil dives for errant balls.

“Credit to them [Eslapor-Rodriguez pair], they are also good and strong,” said Gonzaga, adding she could now relax and get that deep sleep she was deprived off heading into the tournament.

Espolar and Rodriguez played with less pressure, too, and treated the final like a mere training session.

“It’s all-Filipino so we went out there playing as if we were just training,” Rodriguez said. “But yes, they gave us a good fight and and we fought hard, too.”

PNVF president Ramon “Tats” Suzara said the 1-2 finish in a Volleyball World event is the best performance by any Philippine team.

“The result augurs well for Philippine volleyball and for sure, the PNVF national team program will push toward getting better in the international arena,” Suzara said. 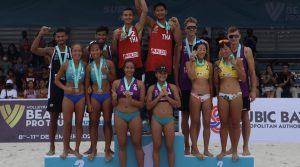