FIVB LEVEL-II COACHES COURSE GETS UNDER WAY IN CHENNAI

Chennai, India, October 14, 2019 – The FIVB Level-II Coaches Course commenced on Monday at Dr Sivanthi Adityan FIVB Regional Development Centre in Chennai and will run through coming Friday, with a total of 33 candidates from various States of India participating in the five-day course.

In his speech, Mr Shri S. Vasudevan recalled the contribution made by late Padmashri Dr B. Sivanthi Adityan for the development of volleyball and informed that he will make all-out efforts of having a separate fully-fledged indoor stadium for volleyball in Chennai thus fulfilling the dream of late Padmashri Dr B. Sivanthi Adityan. He also advised the candidates to gain maximum benefits from the course.

Mr A. Ramana Rao said briefly in his welcome address about the Centre and the Level-II Course and asked the candidates to sharpen their skills as per latest techniques, while FIVB Course Instructor explained about the salient feature of the course, an advanced course for coaches aimed at studying theory of training, improvement of skills and fitness, psychological aspects of coaching and advanced game tactics. Mr G.E. Sridharan’s operational guideline relevant to the course has been conducted theoretically and practically. 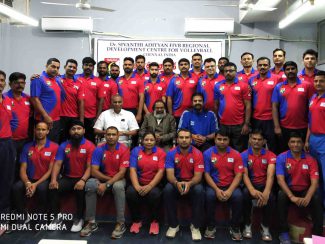