Tokyo, Japan, September 27, 2019 – FIVB President Dr. Ary S. Graça F° on Friday delivered a speech to the Board of the Japanese Volleyball Association (JVA) in Tokyo in which he made valuable suggestions to ensure volleyball remained one of Japan’s most popular sports.

Volleyball has a great history and tradition in Japan. Since first appearing on the Olympic Programme during the Tokyo 1964 Olympic Games, volleyball has become one of the nation’s most popular sports to both play and watch.

Before addressing the Board, the FIVB President spoke to the JVA staff and thanked them for all the support and also encouraged them to continue working hard to ensure the development of the sport in their country. President Ary Graça also praised the efforts taken by the Association to maintain the continued growth of volleyball and made some suggestions on improving the operational and training processes to ensure best possible results.

The FIVB has seen unprecedented success in recent years, with both the London 2012 and Rio 2016 Olympic Games proving to be sell-outs. In Rio, volleyball and beach volleyball combined to be the most watched sport in terms of viewer hours, according to the official IOC Data Report. In his speech, the FIVB President made reference to the upcoming Tokyo 2020 Olympic Games, but also highlighted the importance of maintaining the momentum of hosting events and promoting volleyball and beach volleyball following the Games.

“All eyes are on Japan next year,” he said. “At Tokyo 2020, I fully expect this trend of sold out venues and high viewing figures to continue, as it is the birthplace of Olympic Volleyball. But I hope that the eyes of the volleyball world will continue to be focused here for many years to come.”

The FIVB President stated: “We are growing and our events are attracting more and more fans, sponsors and media. Volleyball has the potential to grow the sport even more, and we are ready to work hard together to achieve this goal.”

Following the speech, attendees participated in an open discussion with the FIVB President and had the chance to ask more questions, ranging from athlete training regimes, to FIVB events and future plans. President Ary Graça offered innovative solutions to some of the challenges that the JVA staff face and there was an enthusiasm from all to begin work immediately on creating new opportunities for engagement.

JVA President Kenji Shimaoka echoed President Ary Graca’s thoughts and highlighted the importance of maintaining a high level of volleyball throughout Japan. He committed to exploring the FIVB’s new methods of developing the sport and spoke of his enthusiasm for working with the FIVB on the two organisations’ shared goals. 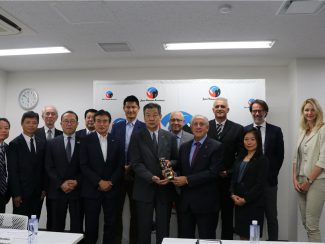