Tokyo, Japan, September 26, 2019 – An FIVB delegation, led by President Dr. Ary S. Graça F°, met with the President of Nippon TV (NTV), Mr. Yoshinobu Kosugi, and members of his senior staff at the NTV building in the Shiodome district of Tokyo to talk about the exciting development of volleyball in Japan.

Together, the delegations discussed changes to the volleyball calendar, with a focus on hosting fewer but higher quality events that are of increased value to TV partners, sponsors and fans.

The FIVB has always been at the forefront of sports innovation, with the highly-celebrated Volleyball Nations League (VNL) bringing fan-engagement, sporting technology and production values to a new level.

Japan has unquestionably been an important part of the VNL’s success, with 12 Japanese men’s and women’s national team matches being staged in the country every year. The FIVB President talked of his desire to work with NTV and ensure that the FIVB delivered the right fan engagement for Japanese fans, not only during the VNL but across all major events.

“When I became President of the FIVB, innovation was a key part of my mandate, and we are delivering on that around the world,” President Ary Graça said. “Japan is famous for new technology, so it is a natural fit that we should work with NTV and our Japanese partners to bring this technology to volleyball for the good of our fans throughout the country.”

During the meeting, the two organisations also discussed the upcoming Tokyo 2020 Olympic Games and the progress of Japan’s underage national teams. 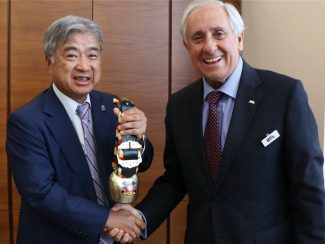