The President of Poland and FIVB President discussed the success of the 2014 FIVB Volleyball Men’s World Championship which was staged in Poland. They were also joined by the Polish Volleyball Federation President Jacek Kasprzyk and World Anti-Doping Agency (WADA) President Witold Banka who attended Poland’s opening match against Iran. 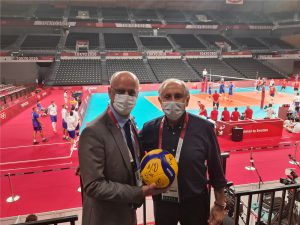 Meanwhile, the FIVB President met with Minister Jean-Michel Blanquer to discuss the role of volleyball and beach volleyball in physical education, especially among girls. As a non-contact sport, volleyball is the perfect sport for girls and boys to play together during childhood. Volleyball is also a gender balanced sport by nature and is therefore well positioned to promote gender equality and inclusivity. Joining them were Paris 2024 President and IOC Member Tony Estanguet, French National Olympic and Sports Committee President (CNOSF) Brigitte Henriques and CNOSF Secretary General Didier. Seminet.

Given Minister Blanquer’s previous role as Dean of ESSEC Business School, one of the most prestigious business schools in the world, the FIVB President also provided an update on the FIVB’s groundbreaking partnership with CVC Capital Partners and the subsequent launch of Volleyball World.

“I would like to thank everyone for taking the time to visit the beautiful Ariake Arena. Both France and Poland are already very strong volleyball nations with good role models. However, it is always necessary to discuss how we can elevate volleyball to even greater heights, whether at the grassroots or elite levels.

“Clearly we are 100 per cent focused on Tokyo right now and ensuring the success of the volleyball and beach volleyball events here. But it is always important to be looking ahead to secure the Volleyball Family’s future and ensure that our sport is always developing and striving to be better.”